Be a Sponge: Your Presentation Like a Dyson Vacuum? 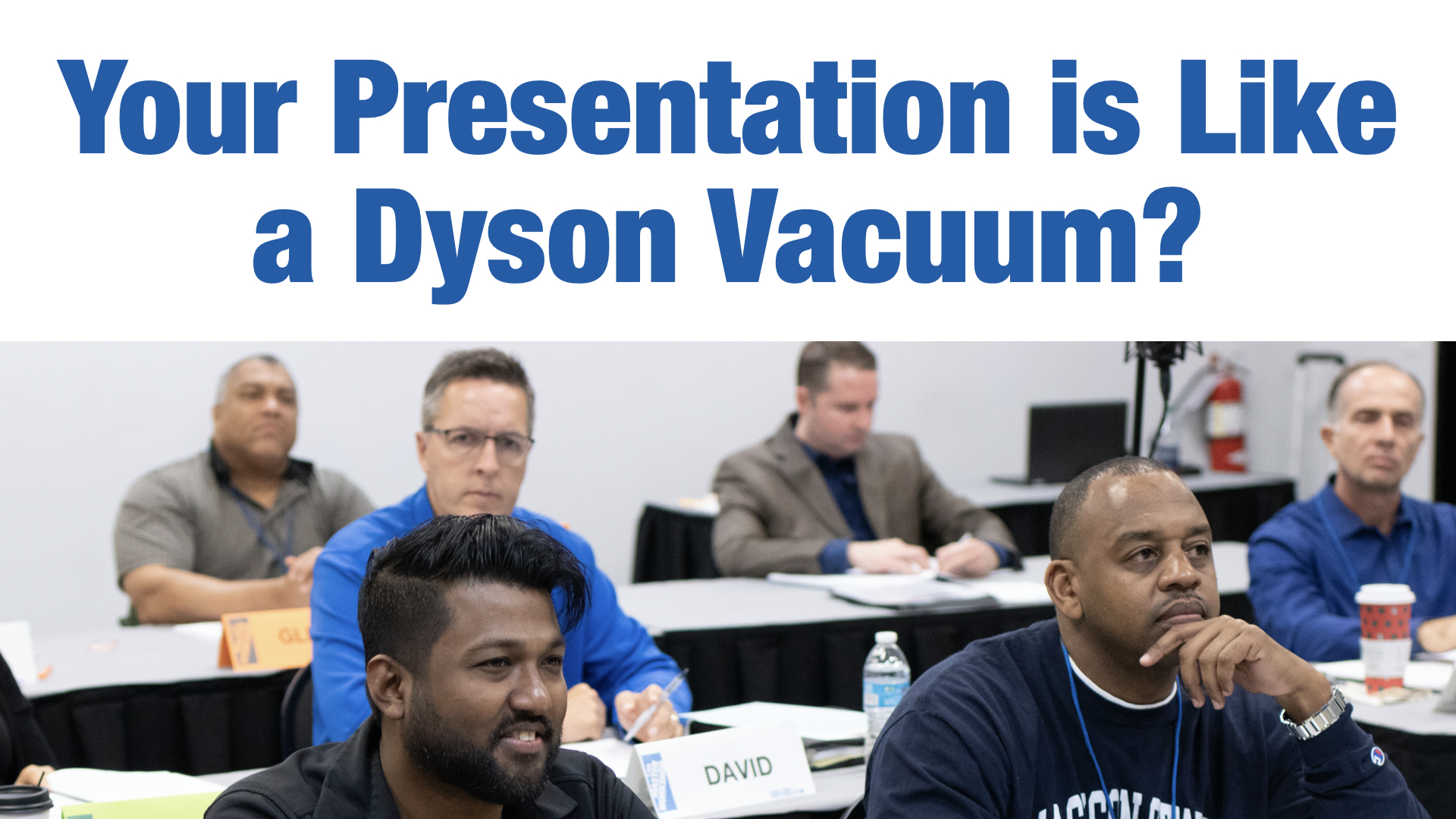 I’m not saying it sucks!

“The final solution never looks like your first idea. Failure is the starting point.” -James Dyson

How does this quote apply to your life, career, and dreams?

Have you seen the old TV commercial with James Dyson promoting his bagless vacuum?  Is your presentation like his vacuum?  How about your life?  It may be more like one than you think.  With most of us looking towards new beginnings, I have one important question for you, but first, let me explain.

A few years ago, I was in Kansas City, preparing to present to a group of professional National Seminar Trainers.  As I walked down the hallway with Steve, who was running the event, I asked him for the second time, what was the one main point you want people to walk away with from my presentation?  He confidently and without hesitation said, “Be opened to change.”

Their conference theme was: Unite. Evolve. Succeed. It was a great event, and I was impressed with the people, the meeting room, and how the whole event was run, first class.   I am always looking for examples from my experience that the audience can relate to. I brought up watching the movie Stripes with my nephews and how even Hollywood changes how it tells stories today compared to years ago when I was young.  I also referenced how the old speaking business model from twenty years ago is no longer viable.  We must change with the times, or we will be left behind.  Do you still have a rotary phone?  Those with the ability to adapt will thrive.

My new resolutions are on top of my mind. So, with my desire to meet the event planner’s goal, along with tying my message into the conference theme and Craig Valentine’s voice in the back of my head, “No phrase, no stage,” I focused. What popped into my head was “Resolve to Evolve.”  It felt right!

I realized part of that idea came from a book Ed Tate gave me that I was reading on the plane a week before, “Everything Count’s by Gary Ryan Blair.  In this book, he had a powerful quote from James Dyson, who created the world’s first “bagless” vacuum cleaner and though most manufactures turned him down, he finally sold the 5,127th prototype:

“There is a myth about inventors that all you need is one good idea, and you’ll make a fortune. It doesn’t work like that. You start with a problem, and you start building prototypes—hundreds or thousands of prototypes. The final solution never looks like your first idea. Failure is the starting point. You start looking for why it failed, and you can start thinking about ideas to overcome that failure.”

That is just brilliant!  As Blair points out in his book, we tend to celebrate the instant success, when what Dyson says is that we should celebrate the person who persists and keeps creating new prototypes that fix the problems of the one before it.  The success lies in resolving to evolve until all the failures are worked out of it.  I love when he points out that the final prototype doesn’t even look close to the first one (neither will your first idea for a speech).  I want to point out that without the first one, there would be no 5,127th.

Often, we see master storytellers and become jealous of the stories that happen to them.  Ever think, “I wish something like that would happen to me?” Maybe it has. Perhaps you didn’t see it.  You are not seeing that storyteller’s experience; instead, you see a well-told story representing their experience. We are just seeing/hearing the final prototype that the presenter resolved to evolve.

I was shocked when I first came to Toastmasters to work on my comedy and saw people looking at their speeches as failures.  They would give a speech, get feedback, and write a new speech.  What? This seemed so odd to me coming from the comedy world. Great jokes are written and are re-written. Great speeches are not written instead, they are re-written.

When I would test out a new story, if even just one person in the back of the room gave me half of a laugh at the time, I intended I would celebrate.  It meant that I got the desired result. All I had to do now was make it “clearer” to everyone else.

Whenever I present my Own the Stage program live, I always ask audience members, “Raise your hand if you have written a world-class speech?” A single confident hand or two go up.  Often one person with a funny self-effacing comment followed by a few giggles resonating through the meeting room.  Most do not raise their hands.  Then I point out that most Toastmasters write a speech, get feedback, and then write a new speech.  Meaning they are not working on a new prototype; instead, they start trying to solve an entirely new problem.

When I was working on my “Ouch!” speech, I wrote the speech, gave it, got feedback, and re-wrote it, correcting a failure or two.  I would then give it again, get feedback, and re-write it correcting a failure or two. I did this twenty-two times. I tell my audience that maybe they have written a world-class speech, maybe you just haven’t finished it yet.

This is not just about presentations; it is also about the person you are.  I hope you have evolved from the person you were twenty years ago.  Will you correct some of the character flaws you have to be a better person tomorrow?  I loved it when I heard the publisher of Success Magazine, Darren Hardy, speak. He mentioned the type of woman he wanted to attract.  He said that instead of focusing on her, he focused on becoming the kind of man that would attract that type of person.  She also has exactly the man she wanted. Wow!

In my opinion, your life and presentation are both like a Dyson vacuum cleaner.  The only question is, are you going to live with the prototype you have, or are you already working on the next prototype?

Will you resolve to evolve?

Share your comments and see others on my blog.

P.S.  What do you care enough about that you will resolve to evolve?

(Response to bonus program at NSA KC Saturday on “YouTube it!”)

OMG!!!!  I am on fire!  I put a mini intro on my YouTube Channel…found out I already have Movie Maker…woo hoo I am making a bajillion movies and pulling packages together:):)

You were awesome…and you made everything doable and easy!!!!!!

Thanks for blessing us with…YOU!!!!!