Be a Sponge: Your Mentor’s Joy 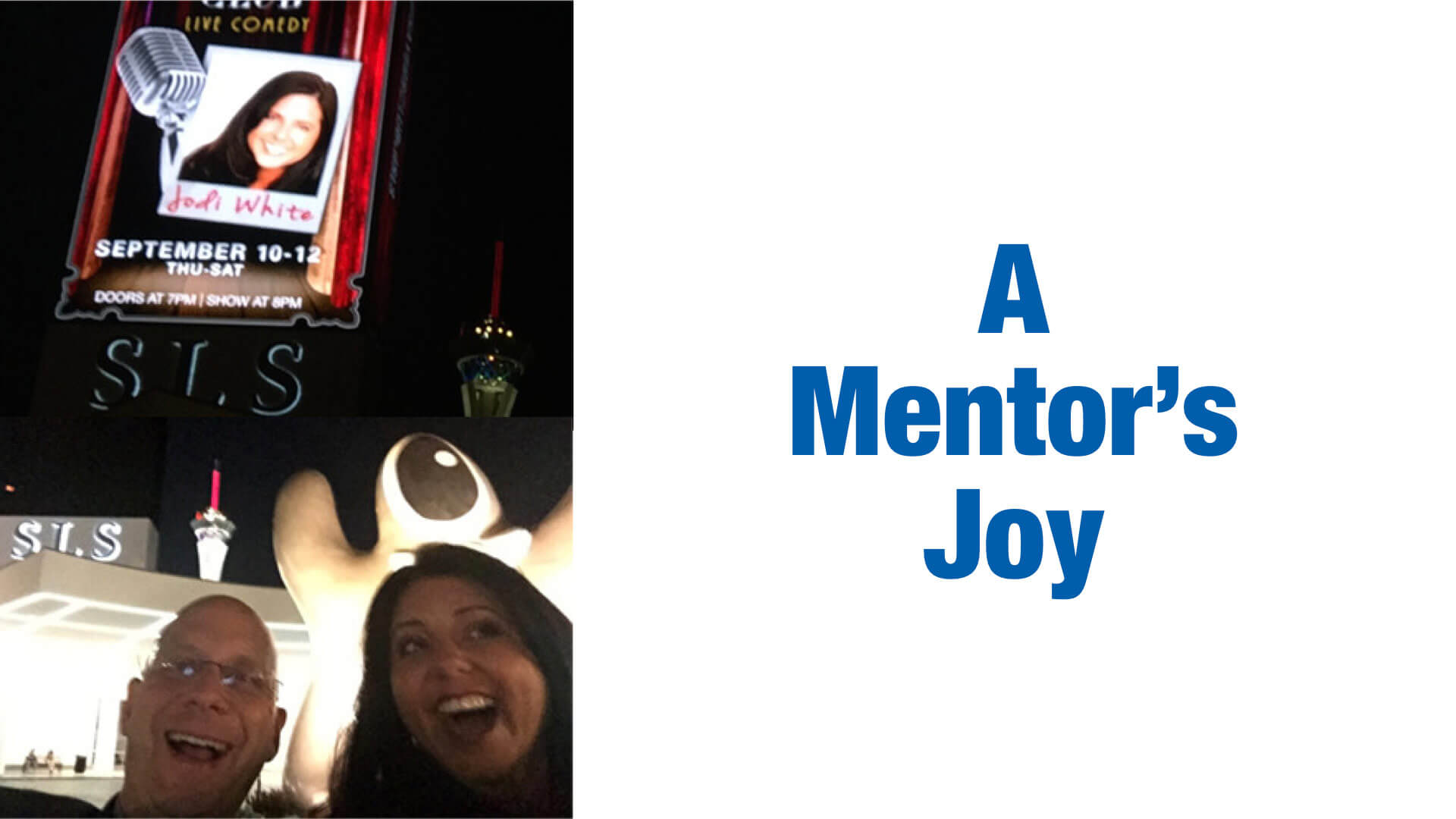 Where would we be without mentors? We all need them to grow. Have you ever thought about what brings them joy? I’ve been both the mentee and the mentor many times over. This experience was a great reminder to me.

The result: Not long ago I went back to my roots to perform stand-up comedy. I was invited to open for a comedian headlining in Las Vegas, Jodi White. When she asked me to open for her a month ago, I honestly was a nervous wreck and avoided her request for over a week. Why? Because speaking and stand-up comedy are two different muscles. The last time I did stand-up comedy was a year ago. I didn’t want to look bad. My ego was talking. I eventually came to my senses and accepted the invitation. I’m glad I did; I would have missed out on feeling joy.

That, however, is not the exciting part of the story. I also got to be part of a dream come true. For any aspiring comedian to actually become a headliner is a huge goal that many never achieve, even after years of effort. To become a headliner for a show on the strip in Las Vegas is another ambition. A powerful visual representation of that is seeing your name on a marquee.

I’ve known Jodi from before she even started towards her goal. We were awestruck standing there and seeing her name in lights. She did it. I felt giddy as we took a selfie under the two-story sign. I’m not sure which one of us was more excited.

The beginning: Let me take you back eight years. Jodi White was a Toastmaster and was telling her stories of overcoming her personal challenges. Fellow Toastmasters told her she was a great storyteller who always brought her audience to tears, but she needed to bring some levity into her storytelling.

She saw that World Champion Speaker Jim Key and I were holding a Humor Boot Camp and decided to join us. As a teacher and mentor, you never really know the impact of your event until students go home and put it into action. It is the application of the teaching that is the important part.

After the boot camp, Jodi dove in and signed up for an open mike night at McCurdy’s Comedy Theater in Sarasota, Florida. She ended up taking more classes and got her start there, and McCurdy’s become her home base. She was off and running.

A mortgage broker by profession, her life took a dramatic turn when the bottom dropped out of the housing market. With nothing to lose, she decided that she was going to find a way to make stand-up comedy her profession, and she went all in. This was not easy for a mother of three.

The struggle: Most people who dream of being a comedian do not have the drive to make it. They either quit completely or stop growing once they reach a certain level in the comedy world. The only worse situation is that they come up with their first five minutes and never go deeper to find their unique voice. This means they work hard and struggle to grow by only adding a new joke here and there. (Many speakers suffer from this same complex.)

When I asked Jodi about her struggle to achieve her dream, she told me story after story. To make it in the stand-up comedy world, you need to be on the road constantly. You travel from city to city each weekend. Not fun, and one of the reasons I left stand-up in 1998 to pursue a speaking career instead.

Jodi told me about one trip when her cruise control stopped working, and she had 1,100 miles to go. She was focused on the cruise control, but my chin dropped when she said 1,100 miles. When you are struggling to make it in the comedy world, you don’t get paid enough to fly from city to city. You drive.

Behind every success there is usually a story of persistence. There are also moments of questioning exactly what you are doing and wondering if it is worth it. I had this in my own story while sitting at my desk at Bose Corporation wondering if I would ever make it. Most of the time the struggle on and off stage is exactly what you do need to grow into your dream. To become that headliner, lessons need to be learned; and perspectives need to be internalized.

After I did my own ten-minute set at the Bonkers Comedy club in Las Vegas, I sat in the back of the room and watched Jodi work. I had a tough time getting some laughs, but Jodi turned the audience from lukewarm to red hot. When you watch a true professional working at a craft that they love, there are moments of amazement. Sitting in the back and watching Jodi made me beam from ear to ear. I could not have had more joy.

Though I only had a tiny role in getting her started, I felt so proud of her.  I got choked up a couple times reflecting on her story. It was cool that she took what she learned and put it into action. Some of my friends came out to the club to support me; but I have to say, I got so excited telling them Jodi’s story. The student surpassed the mentor, and that rocks! The two parts of being a mentor that bring me great joy are watching a student persist through adversity and achieve their goal with integrity.

Jodi is now married to her best friend, comedian Dale Jones. They moved to Los Angeles and have an apartment that overlooks the ocean. Though she still has more aspirations, I smiled when she told me with conviction how much she loves what she does and the life she has now.

Whenever you see a marquee, keep in mind there is a story and a struggle behind it. No one starts with a marquee, and it takes a great deal of effort to keep your name in lights as well.

For your goal or dream, what is your marquee? When you get there or even hit a milestone, please share it with your mentor. Take the time to let them know. They usually love to hear it even more than you like telling them. It keeps mentors mentoring.  It gives us energy especially when we hear well-meaning people ask for advice, but not acting on it. No one will understand and appreciate it more than the two of you, together. It’s nice to hear and say, “I’m proud of you.” That’s pure joy.

P.S. For more about Jodi White, go to: www.JodiWhiteComic.com

Please share your thoughts and read comments from others below!