Be a Sponge: The Underdog Effect 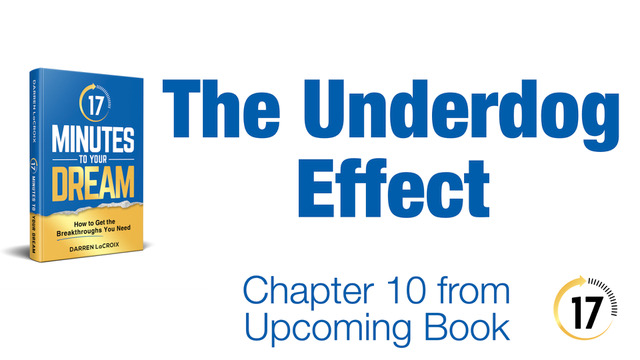 Back in my early comedy days, I was taking to heart what my mentors had told me. I did whatever they said, even when it was uncomfortable. When they said jump, I didn’t just say, “How high?” I also said, “How often?” I was open, eager, and, you might say, a sponge. Unlike my early days owning a franchise when I thought I knew better, I now know that I didn’t know. That is invaluable, especially when you are going into uncharted territory.I learned any day I didn’t go on stage was a day that I didn’t grow. The challenge was that there were only so many open-mic nights in the Boston area. Most of them were horrible settings. I’m talking in a bar, at a bowling alley, standing on a milk crate. Did I mention you would have to compete with the TV at the bar? Not ideal, but you had to earn your way from the horrible settings to the real shows in the real comedy clubs.There were times when, if I couldn’t go on stage in Boston, I’d drive two and a half hours to Portland, Maine, to go on stage for five minutes and drive back and go to my day job early the next morning. It may sound crazy, but that’s what I thought I needed to do. So, I did. My high school buddies told me that was stupid. Be careful who you listen to.

About a year and a half into my comedy career, I remember an open-mic night at the Comedy Connection in downtown Boston. I had just come off stage, getting a few small laughs in myfive-minute set. I thought, “Tough crowd.” I sat with my mentor, Vinnie. We watched a new comic go up on stage for the first time. He crushed it. The new guy had non-stop laughs. Good for him, but what am I doing wrong?I was disgusted. I had been busting my butt for over a year and making little progress, and it was his first night. I turned to Vinnie and asked, “How do you know who is going to make it?” He matter-of-factly said, “That’s easy; whoever keeps going.” We can’t compare our journey to anyone else’s. Period.Then he took a drag of his cigarette and said, “You’ve been taking that stage time thing to heart. I like that.” Then he said, “I’m a headline comedian. I play all over New England at the best clubs. I’m going to give you five minutes of stage time wherever I play.” What? Are you kidding? Then he leaned in and got right in my face and said, “But if you ever turn down stage time, I’ll never help you again.” What just happened? How did that happen?I believe when you are all-in, people notice. They want to help the humble person striving and willing to make mistakes and get up and keep going. When you are humble and all-in, people of influence come alongside you. Whether you think it is God or the universe, something happens. There is a multiplying effect to your efforts. It is the same thing I noticed in high school football. I was completely committed, fully focused—all-in—and eventually, my skills developed, and the  coaches noticed. I call it the “underdog effect.” People root for the underdog because their odds are against them. People want to help people who are striving for the impossible. It works.

We know about intelligence quotient (IQ), emotional intelligence or quotient (EQ), and artificial intelligence (AI). I’d like to introduce you to a different concept, one that I’ve experienced. I believe it is an underlying factor to all underdogs who achieve the seemingly impossible. I call it AII, “all-in intelligence.”I think when you have the all-in mindset, people are compelled to come alongside you and help. Your dedication inspires people who want to help. It makes you stand out to mentors and people of influence as well. The surge builds, and you get noticed. Why? Because it’s so rare. People will go from cheering you on to asking, “How can I help?”It’s one thing to be the person in the arena. You also want to turn the naysayers into believers. Show them. Ever see a mom determined to clean up a disaster in the house? She yells at the kids who caused it to help. They won’t. She says, “Fine, but you can’t leave the room until it’s clean.” They say, “Fine,” and sit there. She indignantly grabs the vacuum and starts alone. No one moves. But the wake of inspiration created by Mom doing what needs to be done slowly flows through the room. One kid gets up and says, “I’ll pick up the toys, but I’m not dusting.” Mom doesn’t flinch. She keeps at it. Soon, every kid is pitching in because Mom is all-in.When you have the resolve and make that commitment, something magical happens. I can’t explain why, but I bet you have witnessed it. I’m suggesting you use this universal underdog effect in your favor. Become that person on a mission that people suddenly want to come alongside and help. Be all-in—they’ll notice.A few years ago, fellow World Champion of Public Speaking, Craig Valentine and I led a two-day workshop in Baltimore called “Get Coached to Speak.” At this event, VIPs get personal two-on-one coaching from Craig and me. That is what they invested in. We have so much fun together while transforming the VIPs together. Before the event, Craig banged up his knee coaching basketball for his son. Yikes for him, and yikes for our students as he had to have emergency surgery. What would we do?We did not have much time. We looked to our students, who were out coaching speakers and doing it at a world-class level. It was unanimous; we both agreed Mike Davis was getting the call. He was elated that we chose him and a bit nervous. We flew him out to the event, and he delivered. He had taken all of our courses, been to all of our events, making it happen for himself. We noticed. When you are all-in, people will notice. We did. That is why Mike got the call. Since then, Mike has become an amazing emcee at our events, hosting our online coaching calls and coaches alongside us as equal colleagues. We noticed.When I asked Mike about this story and how he came to be all-in, he told me something that surprised me. Remember the story of my mentor at the beginning of this chapter? It is also a story I told from the stage for years. Well, Mike Davis heard that story when I met him in 2002. He said whenever he was going to turn down stage time (a.k.a., minutes), he heard my mentor’s voice in his head: “If you ever turn down stage time, I’ll never help you again.” That story helped Mike be allin. Because he was all-in, he got breakthroughs he would not have obtained otherwise. I sincerely hope it helps you too.On January 1, my buddy Mark Kamp and some of his friends did an all-in polar plunge. Even though we live in Las Vegas, the water is cold on January 1. True, he didn’t have to cut a hole in the ice like they do in Alaska, but it’s still cold. Though I was invited, I refused to give in to my Catholic guilt and do it for guilt’s sake. To me, it didn’t prove anything. It may be brave, challenging, and fun, but what would it mean? So, I stood on the side and filmed a Facebook live for them.While watching them, I thought, “What could I do that would make a substantial difference in my life for my dream?” Though I refused to be guilted, I was inspired by their actions. I couldn’t stop thinking, “It’s time. I have to do something. If they’ll jump into freezing cold water, I can jump back into my dream. Why would I let seven years of effort just sit on my hard drive? Why? Because I don’t want to be rejected? Ugh, what kind of a teacher and motivational speaker am I? How dare I? It’s time, as they say, to ‘Suck it up, buttercup.’”I felt like I had been spat out on the beach by the whale. I felt bad for giving up on my dream and not inspiring others by example. I needed to head back to my Nineveh. I was so excited while doing the Facebook live that I rambled through the video. Even I couldn’t follow what I was saying. I knew I was all-in, again. I left Mark’s house and drove to my favorite place overlooking Lake Las Vegas and recommitted to my dream, creating the movie that might inspire the eight-year-old dreamer in everyone who watches. And, bonus, I was going to declare it to the world as well. I sat down where I wrote most of the script. And, like two defibrillator paddles all greased up, yelled, “Clear,” and the flatline started to beep. My dream was resurrected.When I started back to my Nineveh, I was all-in. I re-engaged and started daily live videos and told people what I was up to. I did my seventeen minutes and spoke my truth about not havinga clue how I was going to sell my script to Hollywood.

Unexpected people would, on occasion, reach out to me and open the door to contacts they knew in Hollywood. It was like a Kevin Bacon effect which means, we know people who know people and are subsequently connected to the world with six degrees of separation. People know people, and because I was allin, people wanted to help me. Breakthroughs happen when you are all-in.This is not about me but about your dream. Are you willing to go all-in? I have a motto: Don’t be a hobbyist; be a lobbyist for your dreams.One more example. I hadn’t written a book in over a decade and never by myself. When my friend Vince, who had written four books, heard how excited I was about this book and how it all poured out of me in seventeen days, he offered to help edit it for me. Again, the underdog effect. I hadn’t even asked. He had experience in a place I needed help. Full disclosure: I love to write but have dyslexia, so my writing needs a lot of clean-up. Your excitement, persistence, and commitment will get people to come alongside you, especially in the areas where you need help and they have experience. Keep your eyes open; it will happen. Are you ready to dive into the chilly waters of the unknown and start touching some sawgrass? Keep answering these questions to stay focused on your mission.