Be a Sponge: Naturally Funny vs. Courage 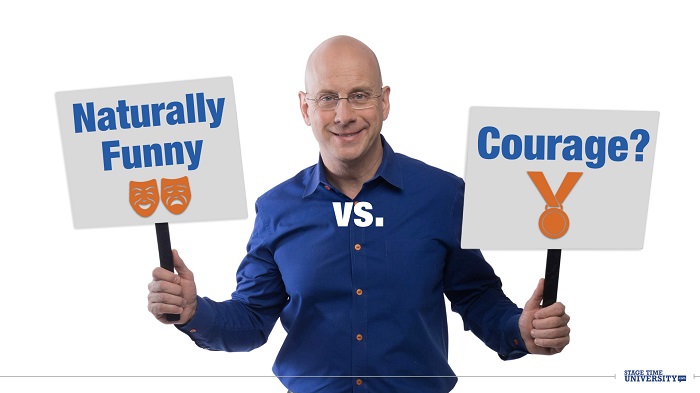 Who is funnier? Would you think it’s funnier if someone was naturally funny or someone who had courage and desire to be funny? OK, so you did not wake up pondering that question, but I used to think about that back in the 1990s. Back then, I had my own little skit comedy cable access TV show; I produced it and surrounded myself with naturally funny people. I was just delighted to have fun with my friends and make people laugh when they saw the end result. The cool part was when we were creating funny skits, we could do as many takes as we wanted and just use the funniest take in our show.

I was always somewhat envious of my naturally funny friends John & Glenn and my cousins, John & Jeff. No one ever told me I was funny, and I learned to accept that; but I just loved being around those guys. They made me laugh. I knew that if I just got them all in a room and turned on the camera, funny things would happen. I was right. It worked. I knew that my role was getting them all in the same room and learning how to run the camera and editing equipment. (Secretly, I was hoping some of the funniness rubbed off on me.)

When the idea of trying stand-up comedy came to me, I thought, “It’s probably not for me; but my funny friends should do it!” They would be perfect! They were naturals. When I shared my idea with them, they each declined pursuing that with me. Why? They have a natural funny bone. It made no sense to me. I had thought everyone wanted to make people laugh from a stage. That would seem like the ultimate.

Years later, after a boatload of experience, it made a lot of sense to me. I understood much more clearly what was going on. It was not the desire to make people laugh that was stopping them; it was the fear of bombing. Being funny around their friends is something they had always done. That came naturally to them. I was puzzled as to why none of them wanted to try stand-up comedy. It seemed like they had so much more potential than I did, and they did. Except for one crucial difference, and they’d have to put in a little effort.

Let’s say two people were willing to try stand-up comedy. Who do you think would get more laughs? Someone naturally funny, or someone with courage, desire and a willingness to make mistakes? All things the same, I believe the naturally funny person would, hands down, be funnier in the short run. There is no question in my mind. What I learned from observing and from experience, in the long run, the tables turn dramatically.

So, the person with courage is willing to go up on stage; and let’s say, they totally bomb. If they learn from that experience, doing it again and again, they will, over time, create confidence and stories that consistently get laughs. The willingness to bomb makes someone unstoppable. There is no room for ego in this process.
I remember one emerging comedian who would go up night after night and never change a word. He had courage, but he was not courageous enough to adjust his routine and try something new. That does not work. That keeps the person and the routine in a deep rut at the same level.

I had heard on a TV program, I can’t remember which one, that my favorite comedian, Ron White, was told that Jeff Foxworthy was in the room the first night he tried stand-up comedy. It was said that Jeff told Ron that if he would learn the structure of comedy, he could make Ron famous. Now, I will say someone naturally funny with a willingness to fail has the most potential, the fastest. They can learn how to bring their naturally funny bone to the stage. It has to be trained. It is a different environment. 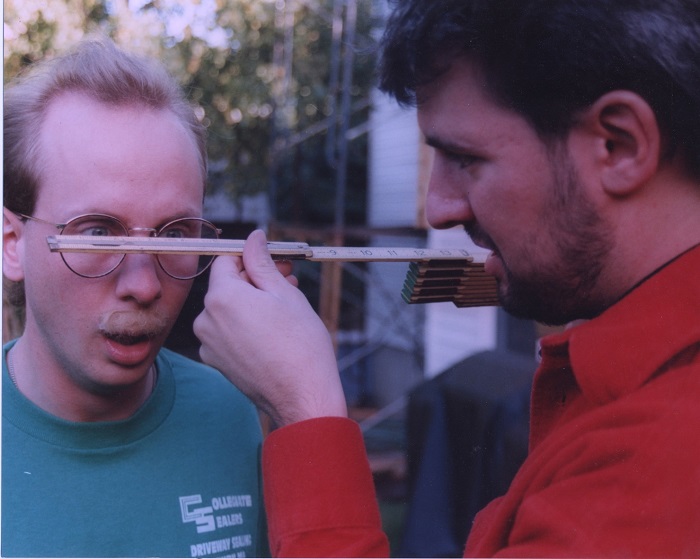 So, who has the most potential to make an audience laugh is an even better question. If we look at naturally funny vs. courage, naturally funny wins in the short run. Courage and desire will overtake them in the long run. Some people who see me speak and tell some of my funny stories say to me, “You’re so funny!” They take those few moments they witnessed and paint that as who I am. It is not true in general; but because I made them laugh, it was true to them.

They, however, did not see my many, many fails. Just like my little Public Access TV show, when you do enough takes, you can edit out the ones that don’t work and develop the idea that does. The same is true with a story or a joke. If you are willing to have the courage to test it and then be willing to tweak until it works, you can be funnier too. You can also make a good story even funnier too, if you have desire and courage. Do you?

Want to give unforgettable presentations?

Created for Serious Presenters Looking for The Best Content, Coaches & Community! Inside you’ll find our master program Get More Laughs by Next Week!