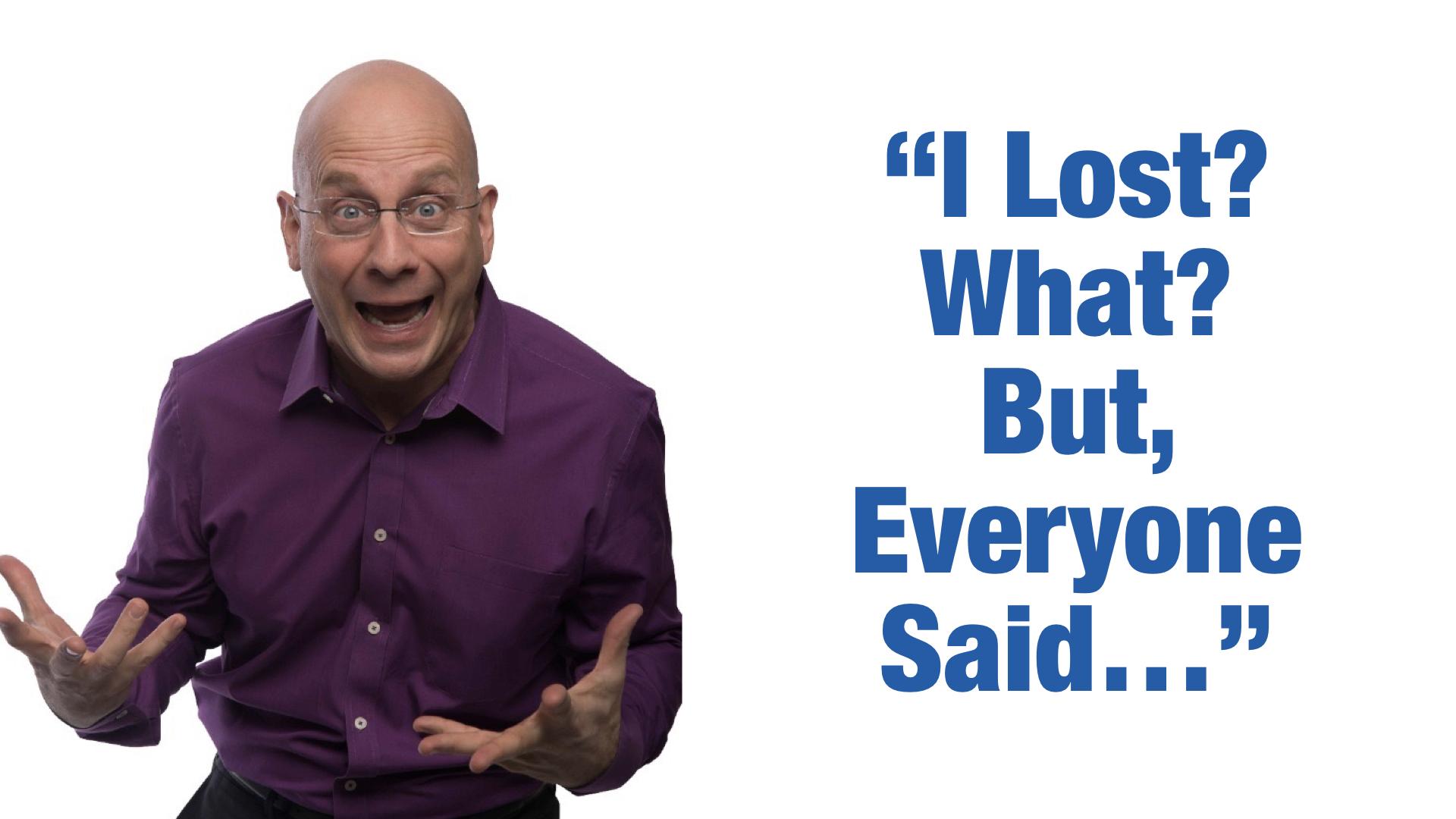 Ouch. It’s frustrating and painful when you compete at anything and don’t win. It is more painful when you take the competition very seriously, work hard and fall short of your expectations. This pain is magnified when well-meaning, biased friends in an attempt to console you by saying, “You should have won!” That seemingly comforting advice can fuel your pain and delay your healing. This wisdom I learned from World Champion, Jim Key. It came to me when recording our recent podcast. Jim came in second in the World Championship twice and came back and won the contest the following year. That is an inspiring story that he lived. Think about it.

When was your most painful loss or bomb? What was the situation? What was your mindset back then? Let me take you back to my journey in 1998. At the time I was a telemarketer at Bose Corporation, an opening act standup comic, and a Toastmaster. I entered the Humorous speech contest with high hopes, after all, I was an emerging comedian. I had lots of comedy club stage time, so I felt like I had a huge advantage. I’ve got this! I worked painstakingly hard on a routine. It was solid. I won the first two levels of the contest and went on to the Division level. I nailed it! And then they announced, “And the second-place winner is Darren LaCroix!” What? But? The contestant that won had taken one-liners from famous comedians and put them together as an original speech. It was funny, and it was creative; but it wasn’t original. In the comedy world if you use anyone else’s material, you are looked down on. This wasn’t the comedy world. I put on my game face and fake smile and accepted second place. Ouch.

Here is some truth behind that moment. I was mad, hurt and very upset. Now, I could have protested, but honestly my self-esteem was so low at that point in my life; and I wanted so badly for people to like me, so I did NOT protest. I see now, that was on me. My bad. I was hurt, I decided that my protest would take place the following year in the form of a boycott of Toastmasters speech contests. That will show them! Well, if you aren’t familiar with the history of the speech contest, the following year Toastmasters had the contest without me. Can you actually call it a protest though when only one person doesn’t compete? I can laugh about it now, and I do; but at the time it hurt, and I didn’t realize I needed to grow up a bit and learn a few more lessons.

Steven Tyler, of Aerosmith fame and an American Idol judge had a brilliant thought when he was being interviewed by Oprah. He said that when he sent people home from the show, he was not saying that they will never be the American Idol. All that he was saying was that they were not the American Idol that day. He went on to say that all it meant was they had to go back into the clubs and learn a few more lessons. I love that! It’s deep. How does that apply to you?

You may have heard me say in my speech, “I called my mentor, Rick, and said, ‘I bombed, I died; they hated me!” Rick said, “So?” How do you argue with so? That was a bomb in my professional career for a paid speech. I thought my paid speaking career was over. It never dawned on me that my mentors, my heroes, the greatest speakers who ever took the stage have also bombed. We just didn’t see it. We see their success from the lessons they learned after they bombed! What if I didn’t call my mentor? What would I be doing now? I would not be a speaker today; that I know.

The reason I’m writing this article now is, it’s that time of year again. The time when the other World Champions and me get emails from around the world saying, “Everyone told me I should have won.” Everyone? Really? Well, I don’t think you spoke to a judge then. Or we hear, “The contest is fixed,” “It’s political,” or “They have it out for me,” or “The judging was horrible.” Guess what, any of the above could be correct, other than “everyone one said.” So? I heard of the new concept that with virtual contests people are taking screenshots of chats to try and back up their point that they should have won. Augh.

I remember the advice that I got from Otis Williams, Jr, “Be so good that the only question is who came in second.” And maybe you were that good. David Brooks said, “To win you have to be talented and lucky.” Guess what. It is a contest. Judging is subjective in a speech contest. When you enter, so do 35,000 other people. Which also means 34,999 other competitors don’t win either.

Here is my advice to people when I get those emails. I tell them that right now they are in the pain portion of the moment. They are too close to step back and look at what really happened. I say, “Wait two weeks and then watch the recording of your speech with a coaching checklist and then ask yourself if there were things you could have done better. Then come back to me.” In all my years of answering that email, I’ve only ever had one person reach back out to me two weeks later. I was so impressed when that one young man did and said, “I watched the recording of my contest speech. You were right.” He knew he had more to learn. That is the response of a future Champion.

One of our Stage Time Members, Darryl Pace, who competed this year, just sent me this email.

Your and your team’s advice helped me turn a major FAILURE last year into SUCCESS this year.

Last year I BOMBED at my Area International Speech Contest.  It was a spectacular failure.  After that, I remembered that someone, or maybe multiple people from the Stage Time team advised that our best speech material comes from our “Firsts, Flaws, Failures, and Frustrations”.

The way I bombed was a First for me, it exposed some Flaws in my speech preparation, it was definitely a Failure, and it was quite Frustrating.  So, I turned it into a speech that told of what happened and the lesson I learned.  Sharing that embarrassing experience has taken me through the Club, Area, Division, and District level competitions so far.

In addition, I’ve received a couple of invitations to speak as a result of the speech — one at a Nissan Toastmasters annual celebration and another at a Women’s Prison Ministry.

Love that! Please think way beyond the contest.  When you get invited to speak elsewhere that’s gold! It’s usually more likely because of your message more as a result of your victory. I love Darryl’s mindset, in hindsight of his spectacular failure. Few people can see that instantly. I was competing to improve stories from my professional keynote. Mark Brown ended up taking his seven-minute Toastmaster winning speech and created a keynote about bullying that he delivered to over a million youth around the country.

Great speeches aren’t written; they are rewritten. After I grew up and looked back at my second place speech Humorous 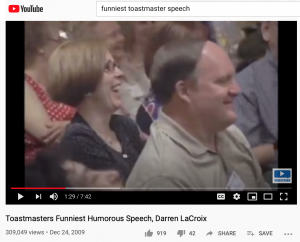 Speech, I rewrote it, tightened it up and delivered it to my NSA Chapter, it went so well I got invited to deliver it at a National Convention during a fundraiser. I also took the same routine and customized it for the organization I was speaking to. It became my signature opening of my paid keynote speech. After winning the speech contest and getting invites around the world, I offered to do a humor night at Toastmasters conventions before I would keynote the next morning. I recorded one of those events and posted the video of that which now has over 308K views on YouTube Video. Remember, that was the speech that didn’t win. It became a foundation that I reworked many times and helped grow my career. Maybe I did win, I just wasn’t the winner that night as Steven Tyler said. There were more lessons I needed to learn.

I have an incredible admiration for Jim Key and his transparency. If you get a chance to listen to Episode 38  on our podcast you can hear him for yourself. I think every speech contestant that did not win, should listen. Please pass it on. He says that in 2002 he competed with the wrong mindset and a sense of entitlement. In 2003 he realized his kids were watching his actions and how he responded to his two second place finishes. Children hear what you say, but your actions are what teach them. In 2003, with lessons learned and the right attitude to serve he became the World Champion. What example do you set? What could your children and grandchildren learn from your actions? Respond to not winning today, like a champion of tomorrow. What will everyone say about how you responded to not winning?