Be a Sponge: Dream of Being in the Big Game? 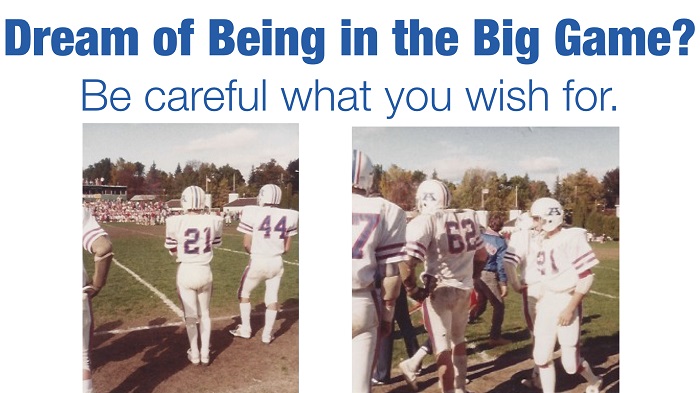 What game did you dream of being in? Maybe an in-demand speaker? Maybe being a TEDx speaker? Maybe in the World Championship? Cool, but be careful what you wish for. You just might get it. This is also another side of success and breakthroughs. You will have new challenges when you are actually in the game.

The picture above was me, number 21. I remember getting upset with my dad for taking that picture because I did not want proof I was usually on the sideline. When I told him how I felt he said, “But Darren you aren’t in the game very much.” He was right. I wished and dreamed for a long time. Wishing, however, never got me in the game. It wasn’t until I said enough was enough and I decided to do whatever it took to earn the privilege for my spot on the playing field. Wishing and earning the privilege are very different.

Are you now doing what it takes to earn the privilege of being in the game? If you want to be an in-demand speaker are you marketing like a pro? Are you reading marketing books? Do you have a coach? If you want to be on the TEDx stage, are you researching relentlessly your idea to make sure it’s unique, true and backed by data? Are you researching TEDx events and themes to know where your idea fits best? Are you doing what it takes to earn that privilege? If you wish to compete in any World Championship, are you prepared that there is a 99.9% chance you won’t win? Will you handle that like a champion?

When we have dreams sometimes we get surprised when called into the game and there are now new challenges that you had not seen coming. More pain. More effort. I loved to throw the ball and when I did get in the game as the second-string quarterback, everyone on the other team wanted to hit me as hard as they could. When you are in the game you will get hit. It’s part of actually being in the game. Sometimes it is easier to be on the sidelines wishing and dreaming.

Last year I tried my hand at Facebook advertising. It looked simple enough and I knew I had a great value-packed membership to promote. I tried different ads and invested a bunch of money and never got one new member from that effort. At the beginning of this year I decided to take a dose of my own medicine and brought a team of pros to do the advertising for me.  They were in the game and had the experience in the area that I lacked.

Here was the cool part. It started working. We invested a great deal of money and it slowly started to pay off. Cool! When you are in the game though, there are other challenges you don’t see coming. With that exposure comes exposure. (Yeah, I know a brilliant statement, but hear me out.) At higher levels of competition there are people who love you and many others who don’t agree or worse, don’t like you. When you are an in-demand speaker you will have some challenging audiences and individuals. I call them the 1%ers. When your audience expands and goes from 100 to 1,000 remember the 1%ers go from 1 to 10. They’re in your audience,trust me. Dorothy, you are not in Kansas anymore, you are actually in the game. 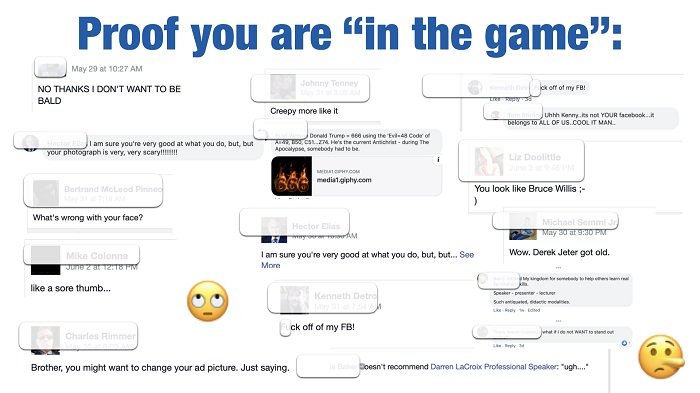 As our ads started getting huge exposure the “trolls” came out too. People who see your ads can reply to your ads with wisecracks and catty comments.  One of our ads says that, “We teach you to stand out.” That has gotten replies saying, “NO THANKS I DON’T WANT TO BE BALD”, “What’s wrong with your face?”, and “get the F*ck off my FB!” Yup, there are also emoji’s with an eye roll and one with a Pinocchio nose. LOL. Yes, it’s easy to say don’t take it personally, but sometimes we do. I get it. We want to reach out and defend ourselves.

The subject of trolls came up on a call with my ad agency, Brand Central Marketing. Charlotte, in her beautiful British accent said, “Trolls are just proof of presence”.  Wow! That struck me. It was proof we were in the game. It is part of being in the game. Think of Dr. Anthony Fauci who was thrust into the limelight a few months ago. Most loved and trusted him, but behind the scenes, I bet he had many who disagreed with him on some issues. With the limelight and exposure comes exposure. There will always be the 1%ers no matter how pure your intentions. It’s just proof you are in the game. If you have no trolls, you might not actually be in the game.

When I finally earned the privilege of being a starter on my high school football team part way through my senior year, it was fun and I got many more bumps and bruises. I also made more mistakes which became lessons learned. Those lessons made me a better player. Be careful what you wish for. You just might get it. When you are in the game there will be new challenges. See the new challenges from the perspective that they are truly a sign of your growth. Get help when you need it. Be a sponge again.

What do you need to do today to earn more of a privilege? Are you prepared for new challenges?