Be a Sponge: Do You Follow Your Own Advice? I Didn’t! 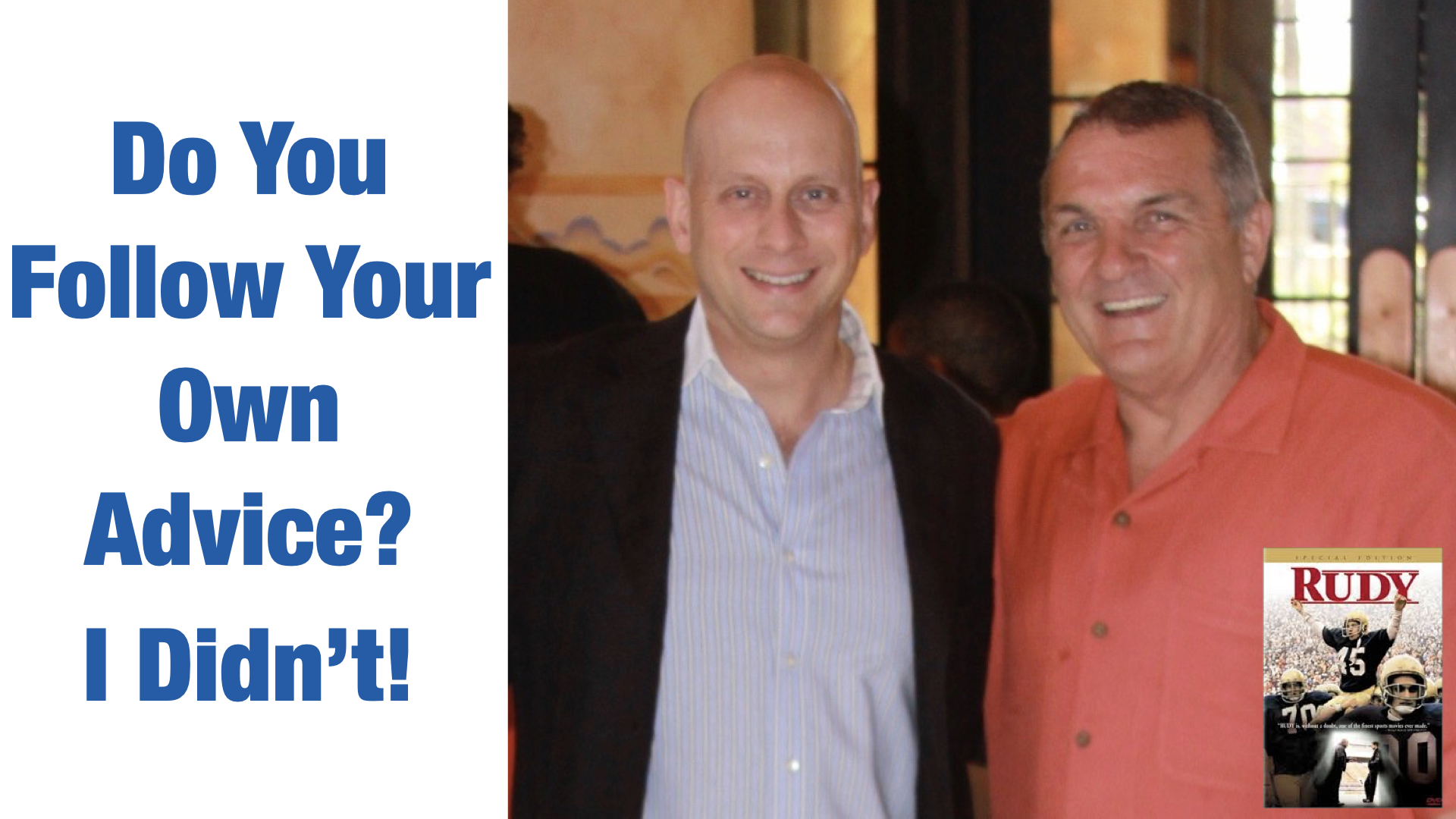 It was the summer of 2012. I was eager to meet with my mastermind group at BJ’s Restaurant in Las Vegas. Mike Rayburn, a mentor and part of the group, asked us a question, “What is your ridiculously crazy dream?” He wanted big and crazy. When it got to me, my turn to share, I sheepishly said, “Well, I’ve loved and been drawn to movies based on true stories my whole life. I’ve been toying with the idea of having a movie made about my story, but who am I to have a movie made about me?” Uncharacteristically, Mike stood up, leaned across the table, getting right in my face with his finger pointed at me, and adamantly said, “Who are you not to?” Wow.

There is a reason many people are drawn to the self-help industry. Inside, many of us have insecurities despite many of our accomplishments. Do you? I sure did. It surfaced in this moment and has risen to the top a few times since then. The movie Rudy was the story that kept me going in the 1990s when I pursued my crazy dream of making people laugh. I had learned that Rudy Ruettiger, the subject of the movie, set out to have the movie created after being inspired by Sylvester Stallone when he wrote Rocky. Rudy says,

“When you achieve one dream, dream another. Getting what you want is only a problem if you have nowhere to go next. Dreaming is a lifetime occupation.”

If I truly am a motivational speaker, I should be working on my next big dream. If not, technically, I’m all talk and kind of a fraud. I remember speaking in Vancouver, Canada; and at the end of my presentation, a young man asked me what my next goal was. I answered by telling people of this goal to create the movie of the story I already had been telling on stage for years. It was the first time I mentioned this goal from the stage. I announced that I would be writing at least 17 minutes a day to get it accomplished. I even put up a daily blog to keep me accountable and in the hopes of inspiring others through my example to do the same for their dream. (I republished this article, but the original one was posted in January 2013.) https://darrenlacroix.com/stage-time-17-minutes-dream-day-1/

Let me back up for a second. Rudy did not write his movie script; he shopped the idea around. Back in 2012, I decided to start driving to California and giving some Toastmaster talks in the hopes of networking and getting leads for my idea. At one of these first events, in LA, there was a Hollywood actor in my audience who was famous when I was growing up. I got a chance to speak to her after. I told her about my dream, and she told me she came to hear my story. She loved hearing true-life success stories. Wow! (She asked that I not share her name). She then went on to explain that she and her husband create movies and that she reads scripts all day long. She said the biggest problem with most of the scripts she reads is structure. Interesting, because that is also a big problem we see when we coach presenters.

I asked her for suggestions finding a writer for my script. She told me after seeing my speech that I should write it myself. What? But I don’t know how to write a movie script! She suggested some books and resources and reiterated, just learn the structure and write it yourself. Yikes! I got every resource she suggested and the software Final Draft to write in the Hollywood accepted format. Then my journey began.

I’d love to tell you that I stuck with it and I finished a year later or something cool like that. If you are following along and doing the math, you probably realize that didn’t happen as that was seven years ago! I recruited accountability partners, and I asked friends to keep encouraging me. It was exciting, and I learned so much about storytelling; but my own insecurities creeped in. Life got in the way. I often let business priorities stop me, and I lost momentum. Momentum is so important because start-up friction can be tough to overcome.

Here is what I meant when I asked you in the title of this article, if you take your own advice. If someone came to me and they were working on writing a book or creating a keynote, I’d tell them to get out of their own way and make it a priority. I tell them,

“Done is more profitable than perfect.”

I’d pass on Michael Hauge’s advice when he says,

“Don’t get it right, get it written.”

The bottom line is I wasn’t following my own advice! Duh! What do you teach? Where are you an expert? Do you follow your own advice? Sometimes, when we are experts, it is much easier to say, than to do.

Well, now it is seven years later. I started in 2012. A normal screenplay is 120 pages. Two weeks ago, I was on page 79. I thought of my own advice and Michael Hauge’s as well. I had been writing again weekly on Sundays out at Lake Las Vegas, which is my favorite place to write. At the rate I was going, I could have dragged it out for another year and half. I was also not following my other advice that is,

“You can’t improve what you don’t complete.”

So, I declared that enough is enough. I committed to going to the pool in my community, away from distractions, and writing two pages a day until it was done. Even if it was a sloppy first copy. I had been trying to get it correct and trying to edit a screenplay which is not my area of expertise! Just get it done, Darren!

This week at Starbucks, I handed Mike Rayburn one of the first copies of version 1.0 of the screenplay. See the image above. I was in my own way because I did not take my own advice in several areas. Now, I still have to get it edited and then undertake the task of pitching it around Hollywood, but I’m excited to finally move to the next phase. What advice of your own do you need to follow?