Be a Sponge: Do You Capitalize on Collateral Growth?

Collateral growth? What does that mean? It’s a learning effect you may not be fully capitalizing on. Never heard of it? I just coined this self-development phrase based on a recent experience. (It is also a medical term, but I’m taking credit for my version in our industry. Tee hee.)

What does it mean? Let’s start with the term with which you are probably familiar. According to Dictionary.com, the common phrase “Collateral Damage” has two meanings. The non-military definition is any damage incidental to activity. Make sense? There is a positive flip side effect to our actions as well.

We take classes to grow. When you go to a workshop or take an online course, you usually intend to learn, “right”? Have you ever noticed that some people take away more than others at the end of a program or course? It happens for a variety of reasons. We are going to focus on an important one.

Can you remember taking a course you were super excited about? You knew that it was just what you needed, and the teacher was an expert you trusted. You just knew you would get a ton out of it. You’ve probably also taken some other courses from which you hoped to take away something helpful. Notice the difference between the two? Excitement and eagerness vs. hope! Some people come to the same course with each of the two different mindsets. Same course!

You may know I love to use the phrase, Be a Sponge! Heck, that’s the title of my newsletter. You can approach a course with the learning mindset or approach it with a lean-in learning mindset. Lean-in learning means you are all in. You are a complete sponge, and you don’t have ego barriers in the way; or, worse, you go in thinking you’ve heard it all before. When you are all in, you are much more apt to experience Collateral Learning. That is any learning incidental to activity. Meaning, you take a course to learn one thing, and you come out with some collateral aha moments you never expected. Those collateral aha moments are a huge bonus. That is much more likely to happen when you come with a lean-in learning mindset.

Last year when speaking for a big bank’s executive team, in my audience was Seth. He was an executive who delivered presentations all of the time. He was good, he was confident, and he knew his industry and topic. He watched me deliver my program and realized there were advanced techniques that he had not been aware of. He was going to present later at the same conference where he had seen me speak. We had a great conversation, and he told me he already made adjustments to his slides for his talk later that day. Love that!

He also had heard of my Humor Boot Camp®, and as soon as I scheduled the next workshop, he signed up as a VIP Coachee. He was a sponge. 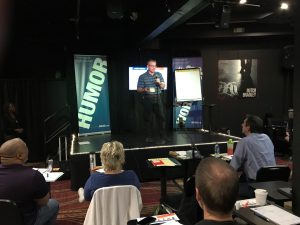 (By the way, there is nothing more exciting to a teacher than someone who is good, has lots of experience, and is eager to learn more.) Seth was excited to jack up his humor skills to get more laughs while delivering his message within his industry.

When he showed up at the Humor Boot Camp®, he was the first VIP to volunteer to be coached. I love that! He was all in. Talk about the lean-in learning mindset. Seth was the epitome of that. Kevin Burke, former Vegas headliner, and I started coaching Seth on the story he usually uses to open his presentation. The story was about a co-worker and some missing invoices. His point was about the importance of automation. He came to make it funnier. 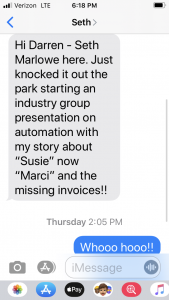 Seth welcomed each opportunity he had to be up on stage. He was even eager to test out some new jokes he wrote during the Boot Camp®. For me, as a teacher and coach, the coolest part is when people go back into the real world with their new tools and skills. Seth did just that. Just two days ago, I got this text. He nailed it! Bam!

The cool part is that this is his career. He presents all of the time, and now he’s got a more powerful story he can tell again and again. Seth came to make his stories funnier and have some new punchlines for his corporate presentations. The Collateral Growth came from Seth being all in! He came for humor, and as a result of his mindset, he also left with new world-class storytelling techniques. His story didn’t just need humor. It needed some clarity, delivery, and stage use help. Well done, Seth!

You’ve probably experienced Collateral Growth at one point or another. My point is to remind you how it happened and why it happened, so you often experience it. It occurs as a result of being open and all in. If you are taking a course or attending a seminar soon, be all in because you might walk away with much more growth than expected.