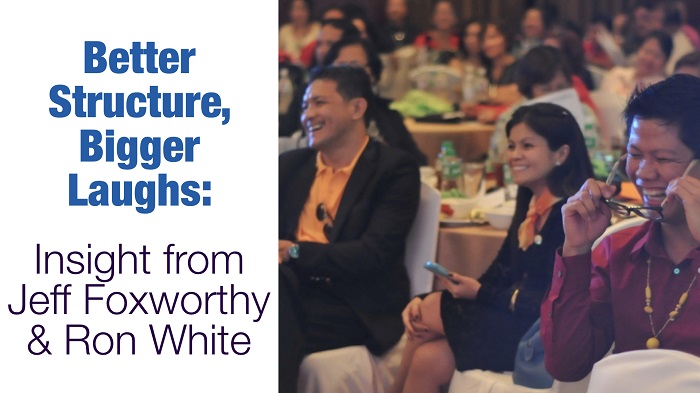 Do you enjoy behind-the-scenes interviews and documentaries? I do! One of my favorite comedians is Ron White. He’s one of the Blue-Collar Comedy guys. Though he is a little rough around the edges for some, he cracks me up.

In one of Ron’s specials, they showed an interview with Jeff Foxworthy. Jeff was actually in the audience the night that Ron took the stage for the first time. Jeff said that he knew immediately Ron would be a comedy star. He was naturally funny. What struck me is what Jeff said next. He said that even though Ron was naturally funny, he still needed to learn a few things about comedy. If my memory serves me correctly, Jeff mentioned one of those things was about the “structure” of humor.

This is a powerful lesson that all comedians need to learn…and the sooner, the better. Speakers, too — especially during the beginning stages of a platform career. I was no exception.

Here is a video lesson I created about this “effect.”

The structure of humor is absolutely critical. The overriding principle is that the “punch word” always goes last. Directly translated, this means… after the punch word, shut up!

The key to success with this exercise was the understanding that the punch word must be at the end. Delivery matters, but for this article, we are just looking at the writing and structure of a joke. In my World Championship contest speech, I had a punch line that was:

“Doubled that debt” it’s the surprise. Once the surprise is out we have to let them laugh. That is why the punch word goes at the end.

Here is another example right from page 53 of the Get More Laughs By Next Week™ Giggle Guide. This exercise is a bit more complicated than I can explain in an article. But as I explain it below, you’ll understand my point about the importance of a punchline’s “structure.”

The participants at the Humor Boot Camp® were given the task of creating humor using song titles. This activity was done to teach them how to create custom humor for specific events at which they’d be presenting.

We were pretending that I was creating a program, called the Greatest Hits of the Humor Boot Camp®. So, the participants were instructed to take any “terms” that we used during the Humor Boot Camp® and “transplant” them into song titles or artist names. We use what I call a “replant the punchline” technique. The terms from the event were the “surprise” or the punch word.

The term that one group used as a “replant” was Ah-Ha Ha-Ha’s. (These are the Ah-Ha’s they got as they learned the secrets of humor.) The other term this group chose was The Rule of 3.

Simply “replanting” a term into a popular song title can be funny — and the right structure can make it even funnier. Again, the punch word is best last.

Another example would be… if you had a character who has dialogue, and the “surprise word” (or punch phrase) was “Squirt! my pen exploded.” It would be funny if the character said,

If even someone as naturally funny as Ron White needs to learn structure in his early days, we all do. Maybe your goal is not to be a comedian? Humor is welcomed by all audiences. It makes your message more digestible. If you care about your message… care about getting it heard.