Be a Sponge: Are You a Farmer or an MBA? 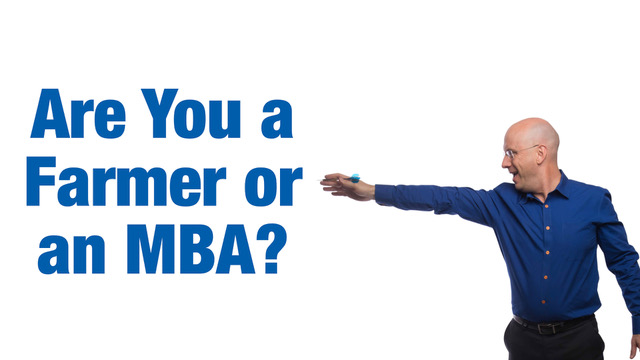 If we pay attention, it is amazing the lessons we learn along the way and how we take the important lessons with us for a lifetime if we truly internalize them. Why don’t we always? Sometimes we have to learn things over and over again until we finally do get it. It’s crazy, I know, but I hope you will agree with me. Some lessons are planted deeply, and we just need to be reminded of them from time to time. Even in bad situations, maybe especially in bad situations, there are truly life-changing gifts if we look. I believe God allows us to go through them, so we grow through them.

Right when I invested in the Subway Franchise, I was very excited. I had visions of owning and running multiple stores. You see, back in the early 90s, Subway was an up-and-coming Franchise in Massachusetts, where I lived. It actually took hold in the Western part of the state and was growing east towards Boston. I lived in Auburn, right smack dab in the middle of the state. There were none in my town at the time. The closest one was in a town called Spencer, a thirty-minute drive away. While I was in business school studying finance and marketing, I learned about the franchise from my high school buddies Jim and Tony, who went to college in the western part of the state and worked at one. I was ahead of the trend! I had the inside scoop in my mind. Why do only things that happen in our minds motivate us so much?

One of the first things that happen after you invest in a franchise, at that time $60,0000, is that they train you. At Subway, this meant you went to USMC, University of Subway Milford Connecticut, at headquarters where it all began for them. It was public knowledge and in their franchise marketing material that they owned about 5000 stores and had a 98% success rate if I remember correctly. I can’t remember word-for-word as it was over two decades ago what they said, but I remember it struck me. During one of the classes, we were asked a question, “Are you Farmer or an MBA?” What? What the heck are you talking about? I was curious, so I sat up in my chair and leaned in.

They explained that by studying the numbers of all of their stores, they noticed the difference between the most successful and the not-so-successful franchisees. Basically, I learned the most successful franchisee in the system were people who were formally farmers. They understood the ethics of hard work and knew they didn’t know how to run a sub shop. So, they invested in the system and followed it explicitly.

People who were MBAs looked at it differently. They invested in the same system and immediately disagreed or even argued with the system. Many thought they knew better. A system that has 5000 stores operating? I’m no scientist, but that is a pretty good sample size. Though I did not have an MBA, I was fresh out of business school with a degree in finance and marketing. I said I was committed and following the system, but inside I did think I knew better. It is embarrassing to see now how my ego made my life more frustrating, and I was a jerk at times to the people in charge of my area from the company. I argued about advertising, food cost, and compliance issues. Wow, having misguided enthusiasm and ego can really add to your own life’s challenges.

In retrospect, I can see now that I was a big part of my own problem. At the time, I did not want to admit it. In fact, it took me years to see the truth. I believe the MBAs could have been the most successful if they committed to the system for a year and then considered their own ideas. I see now that the challenge is not giving a proven process a chance. Book smart is not bad, but the real-life application of those smarts is truly where wisdom comes from. Thinking we know better without actual experience is dangerous. It was a costly and painful lesson I learned. Make no mistake! I needed to learn it, and I did. It was so painful and memorable that I had to pass it on to you.

Keep in mind this is a metaphor. I’m sure there are exceptions on both sides, but look at the idea. It is real, and it is important. I’m forever thankful for learning that lesson, though it took me years to fully internalize it. If you are to learn something new, are you truly open, or do you believe more in your perceptions before you have any experience in that world? Is your mindset that of the Farmer or the MBA?

To be clear, I’m not saying to have completely blind faith or go against your values. I am saying if you genuinely wish to learn a new skill or succeed in a new area, we have to be willing to commit to a process and be uncomfortable at times and experience new ideas from a new perspective. This would serve me today. Thank you for that lesson, God. I had no idea how much I needed it.

What is the Sponge Principle?

What do you take from this