Be a Sponge: The Weirdest Feedback I Ever Heard 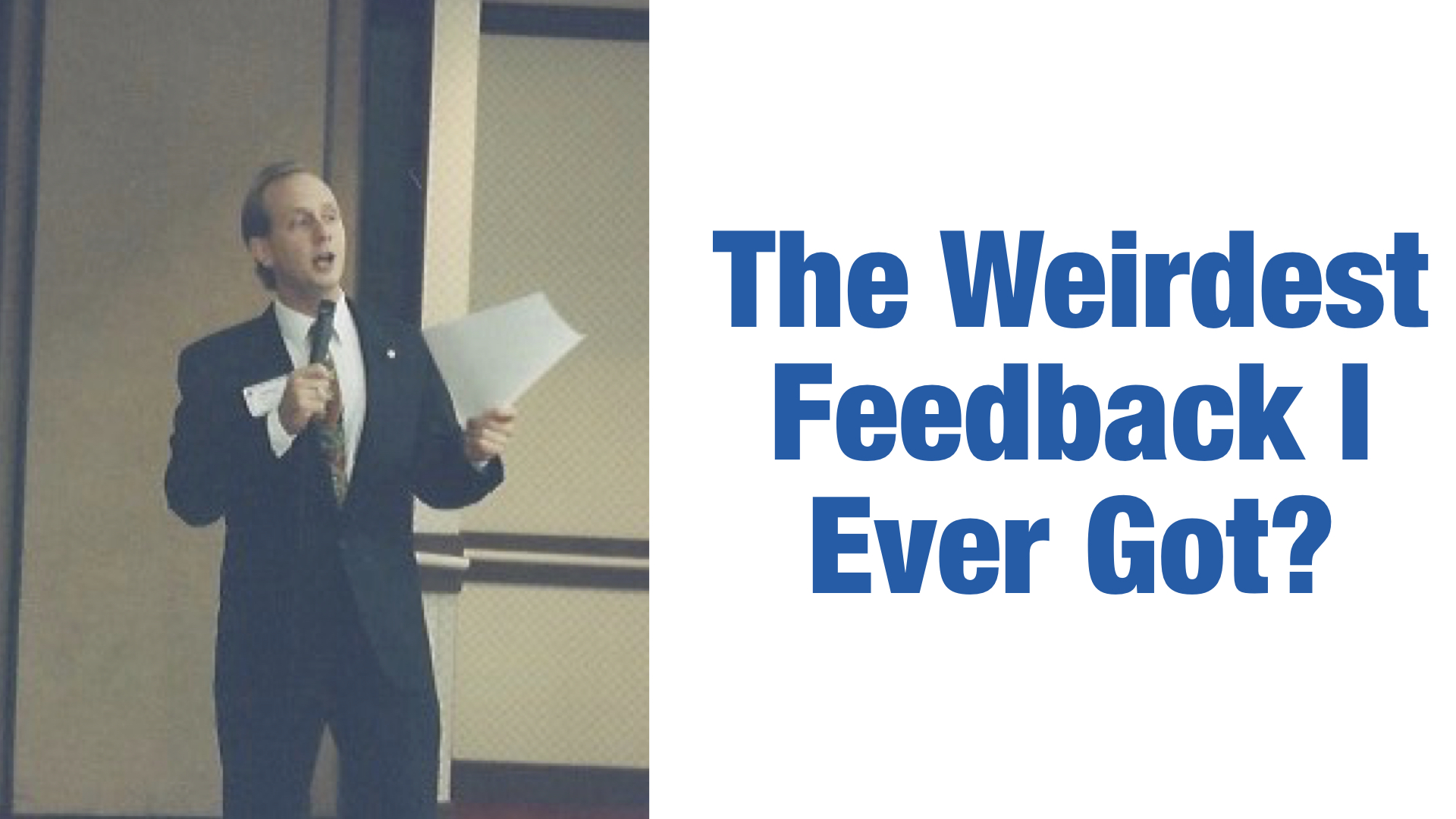 In 2001, while practicing my speech “Ouch!” in front of an Advanced Toastmasters Club, I was shocked and perplexed by a comment from two of the advanced members. At this point I had given my speech several times and had received an enormous variety of feedback. I thought I had heard it all. This comment, though, threw me. After getting many kudos and accolades for my speech, a woman approached me with a very disappointed look on her face and said, “My friend and I listened to your speech, but we didn’t feel anything.”

My first reaction was, “So?” I didn’t think it really mattered. She went on to explain that after years in Toastmasters, she and her close friend both experienced presenters, could pick the winner because the winning speeches always made them feel something. Honestly, it did not make sense to me at the time, and I thought it was very weird.

After years of watching speech contests, I get it now. Getting people to feel a presentation is not a perfect science, and I have no powerful secret to share to make sure it happens when you are presenting. Whether you are giving a corporate presentation or a motivational speech, I now believe that there is power in making people feel during your speech. I believe it is part of feeling connected with you as a presenter. Though it is not 100% fact or an exact science, it is surely something to consider. It is also part of what makes a presentation of any kind stand out and become memorable at the same time.

Using the speech contest as a backdrop to help you give any of your presentations greater impact, let’s look at the World Championship Speech Finals. Tens of thousands of people compete each year with the hope of being one of the nine finalists who compete for the trophy. I sit in the second row with many of the past World Champions. Some of us actually keep a death count. This is a tally of how many people die in the final speeches. When World Champion Ed Tate was preparing his speech in 2000, and after watching other contest speeches, he told David Brooks that he had a problem with his own speech. He said, “Nobody dies in it.” David laughed and told him that was a good thing. Though I’m not a huge proponent of people dying in speeches, I realize that if it is part of your story and the death changed you, then it should be part of your speech. If you are using someone’s death as a way to make people feel, though, it could seem like manipulation. Be careful with that.

If you have ever been at any of our live boot camps, you have heard one of our little secrets from me or one of the other World Champs. We teach that before you create the speech, you need to ask yourself, “What do I want my audience to do, think, or feel?”

While learning speech writing from author Vince Antonucci, I heard him put a powerful twist on that creation secret. A pastor, as well as an author of four books, Vince says, “What do you want your audience to do, think, and feel?” Wow, one different word changes everything. When writing his weekly sermons, as well as when he’s writing books, he strategizes for the doing, thinking and feeling of his audience. Brilliant.

After attending several speech contests over the past month, I realized that when a speech includes someone’s death or a diagnosis of a life-threatening illness, I had better feel it as an audience member. If you don’t make me feel a dramatic event like that, then something is missing from your storytelling.

Here are some things to consider when looking at your own presentation. Are you using enough you-focused questions? When used properly, they will help listeners engaged. Are you narrating your stories when you could be using more dialogue? This can also be a way to help people feel your message. Are you showing the reactions of the characters when telling your stories? Often, showing a reaction creates more feeling in the hearts of audience members than anything you can say.

Your audience is not going to feel anything if they do not feel a connection with you first. That starts with your mindset and the intention of your presentation. You must connect with yourself and be in the moment before the audience will connect with you. I now understand what those two women meant when they gave me that weird feedback. It was weird to me back then because I did not understand it. If it is weird to you, perfect.

Awareness is the first step; it was mine, too. When you ask for feedback on your presentation, ask people if they felt anything during your speech. If yes, clarify what and when. If no, perfect. Now you know what you need to work on. Ask yourself and your speech coach, “What can I do to help them feel my story or message?”

Do you feel me?