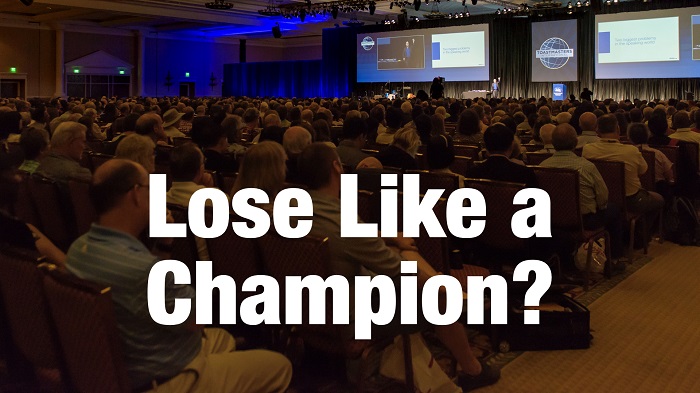 It was 1998. I had been a Toastmaster for four years and was starting to get paid for my keynote speeches. I was sitting in my seat, eagerly awaiting the announcements of the Division Humorous Speech contest. I had worked hard on my speech. It was completely original, and I had gotten some great laughs. 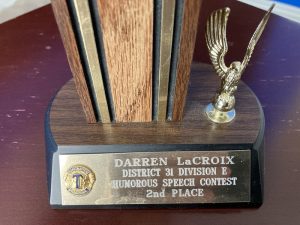 The contest master said, “And the second-place winner is…Darren LaCroix.” I thought, “What? That means I didn’t win! Are you kidding me? Were the judges blind? Did they not see that the other contestant used a string of old jokes and just wove them together? That is not original. These contests are stupid. I’m boycotting speech contests!”

Have you ever reacted that way? I mean, not externally, but to yourself. We put on the smile to be polite, to not look ungrateful. Inside I was ungrateful and mad.

Needless to say, despite my personal boycotting of Toastmasters speech contests for a few years, they continued just fine without me. It’s funny to me now, but I was mad then. Before I could win like a champion, as a brilliant friend helped me realize, I had to learn to lose like one first. I truly had some growing up to do.

The biggest question for any competitor is, “Why are you competing?” In 1998 I was competing to win for my ego. I wanted validation. Though I had been doing stand-up comedy since 1992, I was still trying to prove my credibility in the speaking world. My why was shallow.

It is that time of year again when speech contestants compete worldwide for the World Championship of Public Speaking. For every speech contest that someone wins, obviously, the rest do not. Each person is on their own personal journey, dealing with their demons, naysayers, and encouragers. Their pasts and their mindsets can be challenging, especially when they deal with the emotions of winning and not winning.

Lance Miller, the 2005 World Champion of Public Speaking, is famous for winning the speech contest and for competing nine times and not making it past the club contest level by the very first round. Lance also made it to his District four times (4th level) and three times to the semifinals (5th level, then called the Regionals) before winning the contest.

Wondering how he felt about this subject, I asked Lance about his journey and how he had felt along the way. He has some brilliant insight. He said that in the early contests, he wasn’t winning enough because he wasn’t losing enough. Smart.

In his famous “I Have a Dream” speech, Martin Luther King, Jr. said that he wants his children to be judged, not by the color of their skin, but by the content of their character. I love that line. Well, as a speech contestant, your true character is revealed more when you lose than when you win. Jim Key came in second in the speech contest in 2001 and again in 2002. He was classy and professional all the way, a true champion. In 2003 he won the World Championship. How do you lose? My first time was poorly.

My mindset was surely not that of a champion in 1998; it was just the opposite. I had lots to learn and much growing up to do. In one of Lance’s speech contests, an untrained timer failed to change the settings from an evaluation contest, so the timer was still set to three minutes instead of seven. Lance was the first speaker, and the red light came on three minutes into his speech. It messed him up. He readily admits that if he had been a champion then, it would not have bothered him.

Champions are ready for anything and do not have a victim mindset. It’s horrible to hear, “I would have won the contest if . . .” Ouch! One that makes me shake my head is, “Everyone in the room said that I should have won!” Well, I guess you did not speak to anyone who was a judge. I get it. They hurt. Their friends, who know how hard they worked and love them, were rooting for them. They are not subjective. Even if they are correct, it is up to the judges. I tell anyone who reaches out to me. “I understand. Here is a Coaching form we use. Wait two weeks and watch the recording while looking at this form and then come back to me and tell me what you think.” I’ve only ever had one person come back to me two weeks later, and he said, “Thanks, you were right.”

Speech contests are subjective; so is life. You can learn a lot about your life and mindset based on how you act and respond in a speech contest. Please, don’t email or text anyone when your emotions are high. If you are under the influence of your own emotions, you may say something you will regret in a week or two. The people who run speech contests are volunteers. They are people who deserve respect even if they make a mistake. Results are final. They cannot be overturned even if you are correct. People’s observations of how you act at that moment can’t be changed either.

In 1998 I did not understand that I could have protested. I had the right to, but not the confidence to do so. I would not have learned the lessons I needed to be a better speaker and person if I won that year. My ego would have been fed. Honestly, even if I had, I was coming from the place of a victim. Know the rules, and respect the rules. Know that everyone involved has their own interpretation of them, as well.

I suggest to speech contestants that they wait a week or two, go back and review the recording of their speech, and then look at how good the speech was. You might be shocked at what you see. You might even see what the judges saw that day. Lance says,

“It is going to be pretty hard to learn from my mistakes
if I’m unwilling to admit I’m making any.”

In 2005, Lance was competing to see if he was good enough to speak at the international level rather than to win. When I entered the speech contest in 2001, it was to improve my best stories for my professional keynote speech, not to win. My speaking and stories got better at every level. The pressure of the contest improved my skills forever. No one can take that away from you. It serves you for the rest of your life if your intention is for improvement rather than for a plastic trophy. Lance and I both had to lose a lot in order eventually to win. Notice how both of our why’s changed. Have a bigger why, and you’ll have a better outcome. If you want to win like a champion, first learn to lose like a champion.

If you just want a trophy badly, buy one. It will only cost you thirty-five dollars and it’s easier. 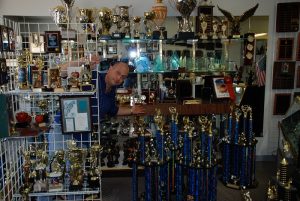