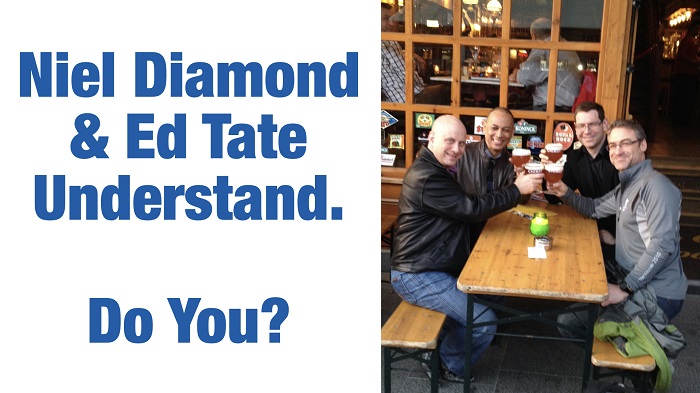 Do you study the best people in any industry to see how their expertise applies to you? On Mother’s Day, a few years ago, I went to see Neil Diamond in concert. He is an amazing performer, especially considering that he was 74 years old.

It is hard for me to take off my presentation coach hat when sitting in an audience.  I want to learn from world-class performers. I love finding the lessons and passing them on to you. Sunday night was no exception.

When we sat down, there was so much to observe around us. Consider how long Neil Diamond has been performing. His first solo hit was “Solitary Man” in 1966. What do you think was the average age of his audience Sunday night? The range was amazing. You could see different generations singing along together. A little boy who was right behind us, maybe five-years old, was belting out some of Neil’s songs. It was cute.

Audiences are changing, though. As presenters, you and I must be aware of this. When I was in high school, I remember going to concerts, and when a rock band broke into a ballad, people raised their lighters and swayed with the music. If you look closely at the picture above, you’ll see that there was a sea of lights in the crowd, but it wasn’t lighters. People were raising their cell phones to take pictures. An image similar to the old days, but different reasoning today. In fact, as we came into the concert, they had a Twitter feed of #sweetcaroline showing up on the Jumbotrons. It was cool. I have to admit that I sent a tweet myself to interact and be part of the event. Some things change dramatically. How can your presentations change with the audience’s mindset?

Though times change, some aspects of performance do not change at all. It was very cool to see the enthusiasm of the individual audience members, jumping with excitement when Diamond’s band started playing a song that had deep meaning for them. When a song like “Coming to America” started, the energy of the whole audience peaked. At one point, Neil came to the edge of the stage, knelt down, and sang to an elderly woman in the front row. As he came closer to her, you could feel the energy of the audience’s energy tap immediately into a higher level. It was as if by getting closer to that woman, he actually got closer to all of us. When he honored her, he honored each one of us. It was as though she was the portal to our hearts. He connected to us through her. How can you use that principle?

Interaction with the audience is a powerful tool that we can use. One of the best in the world at doing that, in my opinion, is Ed Tate, 2000 WCPS. If you have ever been to one of our live events, you know that some of them start with Ed Tate getting the entire audience up and dancing. It is a great way to build connections.

Interaction works, no matter what country you’re in! Last year when we were co- 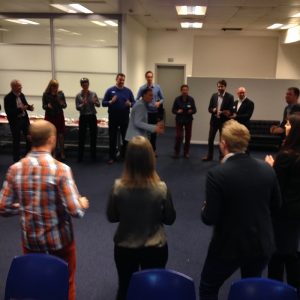 presenting in Belgium, Ed was preparing to get a group of consultants to dance. I honestly did not think it would work in that situation. Ed Tate owned it. He made it happen, and before my eyes the consultants were completely engaged. Interaction, when done right by someone well-trained, works around the world. Don’t use it just to use it. It works best when strategically placed to reinforce a point or a story.

Neil and Ed understand and use interaction to build connection. The concert reminded me of the power of interacting with one individual. I need to find ways to use this same idea to make my own content more memorable and easier to understand.

Where can you use more audience interaction to reinforce your points?