Be a Sponge: OOPS! I Made a Big Mistake on the Big Stage! 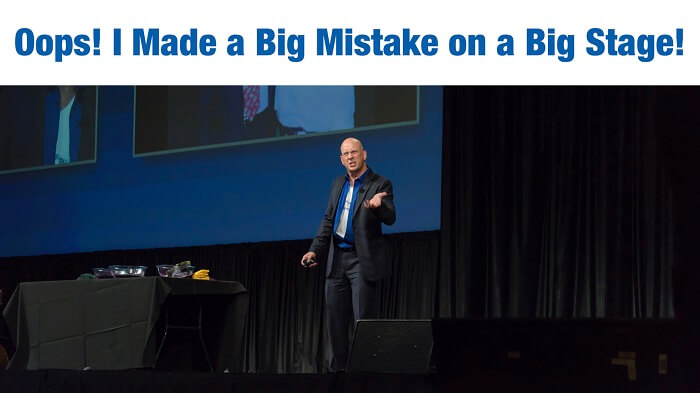 “But that’s not what happened in rehearsal!”

Ever make a mistake that you had to correct over and over again? “Oops, I did it again!” I can hear those song lyrics in my head. After twenty years of stage time, you would think that I had figured out and remembered lessons after having to relearn them three times.

In order to prepare for the opening of the Toastmasters Convention a few years ago, I went to as many Toastmaster Clubs as possible. I wanted to work on my speech, and the way I prepare is by giving the speech live and then tweaking it. The more I give it, the more I tweak it, and the better it gets. People who are great speech writers may have a different process. You need to do what works for you.

In my speech that I was delivering to the clubs, “Sponge: What’s Filling You?”, there is a point where I introduce a quote that had a profound effect on my life. It is a famous quote by Jim Rohn:

“You are the average of the five people you spend the most time with.”

My presentation was about applying this quote literally to our lives. In order to get the audience involved in my presentation, I asked them to write down their top five people. I even paused the presentation to give them time to write. The majority of my audience always wrote. I could see the pens come out and heads down as they focused. I could see the effect it had on people; they really went deeper in thought because of the interaction. Perfect. That was just what I wanted. It worked.

Fast-forward to the opening ceremonies a few years ago on the evening of August 12th as I was introduced right after the President’s opening comments, a parade of flags, and a few songs by Elvis. Everything went off just the way it was supposed to. I walked out onto the stage under the bright lights and began my speech. I felt connected. It was wonderful.

When I got to the body of my speech, I delivered the quote as usual and then asked the audience to write down their top five. Nobody moved. Yikes! This had never happened in any of my practice presentations. Honestly, I was shaken for a moment. I even asked again, “Please take a moment to write down your top five. I can see you!” I said it partially in jest and partially with a little frustration.

Fortunately, the rest of the presentation was well received. Most of it went right. Most people probably didn’t even notice my temporary frustration. I wanted people to participate for themselves. It really was about them.

Or was it? Wow, I can’t believe I still continue to learn lessons as I go. The more I reflected on what happened, the clearer it became. There were several reasons why people did not respond as they had in my practice speeches.

First, consider mindset. It was the opening ceremonies of a four-day convention. Attendees were not in the training mode. It’s more of a time for inspiration and entertainment. That mindset is very different and challenging to duplicate in my practice speeches.

Second, it was evening. After six o’clock at night, people are in an additional mindset. My presentation was more inspirational than training, and it was great for the opening ceremonies; but people are not at that session to take notes. That’s just how it is. The fault was in my mind with my own expectations. My bad.

Third, the room was set up for the cameras and for live streaming video. Though the stage was well lit, the audience was sitting in the dark. That is not conducive to note-taking.

My biggest mistake was letting the unexpected reaction throw me. I pride myself on being good at being in the moment. I usually am, because I continue to work on it. In this case I got frustrated for a moment due to my lack of insight. When I prepared, I should have considered more carefully the circumstances in which I would be presenting. Whenever most people don’t interact the way you planned, it is usually your own issue. It means that perhaps the directions were not clear; or, as in my presentation, I did not consider the mindset of the audience in that situation.

It amazes me how much I still need to learn and relearn. How about you? What did you take away from this article? What did it make you think about? I want to know.

Please share your thoughts and read comments from others below…

Are you a good presenter who wants to be UNFORGETTABLE?

Join me and my world-class faculty on live calls. Get details: https://stagetimeuniversity.com