Be a Sponge: YOUR CRAWL 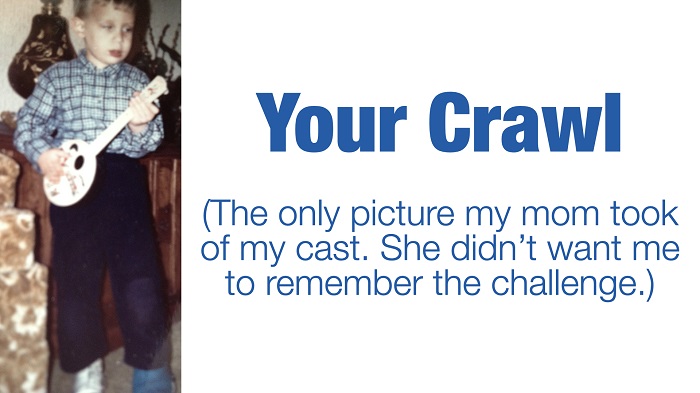 We have so much to learn when we are born, but wanting something seems to be just a part of who we are. When a baby wants something, they go for it. If restrained, they cry until someone helps them get it. If that doesn’t work, they cry louder. If that doesn’t work, they scream. They can be relentless. They don’t question if it is possible or not. They want and keep doing until they find a way or someone helps them get what they want. When did we lose that?

Picture a baby spotting something it wants across a room. What do they do to get it? Everything they can think of! As adults, we have the capacity to think and more creativity to draw from, yet our brains limit our desire and actions. Why?

When I was born, I was born with a clubfoot. If you are unfamiliar, it is a birth defect that affects about 1 in 1,000 babies. It means that your heel is turned downward, and the front part of your foot is turned inward. There is no known cause, but mom’s Catholic guilt was present, making her feel like somehow it was her fault. In the 1960s, many doctors did not want to do anything for me until I was a teenager. My mom was relentless until she found Dr. Karin, who would treat me. It was surgery, casts, and overstretching for years to straighten out.

I was operated on at an early age, and I wore a cast for a long time. As a result, my left foot did not develop and grow as quickly. This forcing me to have to get special shoes, two different sizes, for many years. I also had to wear a metal bar between my two feet, forcing my left foot to slowly twist to its proper position. I kind of works the way braces slowly straighten your teeth.

Being transparent, I only have fleeting memories of those times. Still my mom, like no mother, will never forget watching her child struggle. I’m sure it was hard for her to watch. She also will not forget the small triumphs along the way. Those little victories that are cherished and warm the heart.

As an adult, my family tells me stories of how, when I wanted something, it did not matter that I was wearing a cast as an infant. I just crawled after it, dragging my little cast behind me. What was your “cast” when you were growing up? Was it visible like mine or invisible like many?

The bigger question is, how did we start learning not to walk or crawl after that thing we really wanted? If someone told us back then, “no,” we wouldn’t listen. We want to spend more time with those who give ideas and strategies to get there and stop listening to those who say, “No.” If you are a Least Likely, then this is the mindset we need to get back to. We need to run, walk, or crawl for what we want. We need to make it our mission, to go after what we want, and drag our cast with us. The baby doesn’t worry about how long it takes to get what it wants. It doesn’t matter what anyone else says to the baby; the baby crawls forward.

Picture a group of adults in a large room with plush carpeting, all intent and focused on conversations. On the floor, you see an infant wearing a cast who spots a shiny red ball far across the room. The infant doesn’t even think; it just starts moving. The seemingly wise adults discuss and research why this infant, me, was born with a club foot. While they were conversing, I reached out with my little left hand to grab more carpet in front of me to help pull me forward. While others discussed what I would not be able to do, I brought my little knee forward to my other hand. While some felt bad for me and looked on in sorrow, I reached out my right hand for another handful of carpet to grasp. While people were whispering about me, I brought my other knee forward. While people were discussing how unfortunate it was, I dragged my cast behind me.

Attention adults, stop yapping, kick the ball closer or, better yet, look at your own life as to why you are not moving towards your shiny red ball. We train the child these ridiculous limiting things. We teach kids not to dream. Why? Because it’s not realistic. That is for other people, which often can be valid unless you develop the Least Likely Mindset. It starts by thinking like that infant.

Once you discover your cast, acknowledge it, lean forward and grab a fist full of carpet and pull. While others talk and discuss, grab another fist full and pull.

What is the Principle?

What if not knowing we shouldn’t is the first lesson of the Least Likely?