Be a Sponge: The Whale 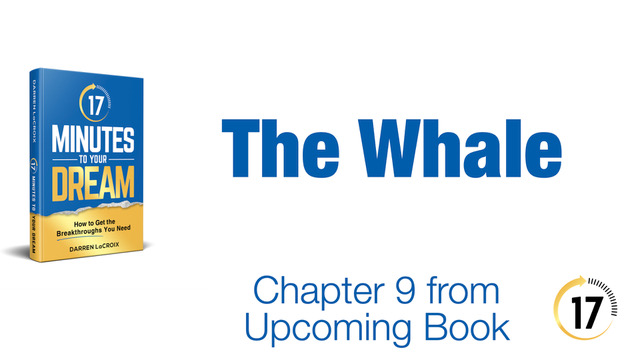 On July 15, 2019, I presented Mike Rayburn, the guy who slammed his hands down and said, “Who are you not to?” a copy of that script. Th at was a cool moment. The feeling was indescribable. I hope you’ve had a feeling like that and, more importantly, can share it again soon with someone who encouraged you to reach your dream.

Okay, the script was done. Now, I needed to sell it to Hollywood. Deep breath. “How am I going to do that?” I honestly didn’t know. I have since learned that there are over 30,000 scripts registered with the writer’s guild each year. Only a handful of them reaches the big screen. Gulp! Well, Mike did ask me what my big crazy dream was back at that restaurant years ago.I reached out to a mentor, Jim, who had his book turned into a Universal Studios film. Remember to ask people who have been in the arena, not your well-meaning friends. Jim told me that I needed to get the script in the hands of one hundred people in Hollywood to have five good conversations. Yes, a number. Did I mention I am a numbers geek? I started a spreadsheet to track my way to one hundred conversations. How hard could that be? Um, we’ll get back to that.

One of the books also suggested looking up antecedents, movies similar to mine, to learn their box office numbers. You can then share those when pitching producers and movie companies. I looked up movies like Rudy, The Rookie, Miracle, The Blind Side, and Soul Surfer. I looked them up on BoxOfficeMojo.com. I also researched the movie companies, producers, and directors for these films on IMDB.com. It was exciting. But, though some of this may have become helpful, it was a distraction from my main focus. I needed to be making calls and getting the scripts in the hands of anyone I could. The research was good, but the actual reaching out is more important. If you are anything like me, we can sometimes confuse being busy with making real progress. Sometimes it is because of self-doubt.

Get clear on what people in the arena tell you is most important. I’ll always remember one brilliant quote Mike Rayburn said: “Beware of distractions disguised as opportunities.” Beware of distractions disguised as opportunities.In the Bible story of Jonah, God sent Jonah to Nineveh, and he ran the other way. He went to Joppa, jumped on a ship, got thrown overboard, and swallowed by a big fish. I don’t know too many fish that are big enough to swallow a man, so I’ll call it a whale. He was in the belly of the whale for three days before he finally realized what he needed to do. He repented and asked for God’s help. Once he did, the whale spit him out on a beach. Then he finally did what he was supposed to do by going to Nineveh.Your dream was put on your heart, no one else’s. Here is my big question for you: Have you been swallowed by the whale of self-doubt?Seriously, have you been swallowed by the whale of self-doubt? If you feel like you have, I get it. I was all excited about selling the script, and it felt courageous because I had no idea what I was doing. I had no big insider contacts. I doubted and made excuses.

Our responsibilities and life incidents can also add to our doubt. We have a life, and we have priorities. Our dreams still need a little bit of attention to stay alive. I’ve got a strategy to help you with that. I wished I’d used it back in 2019. I wrote this book to help you avoid the mistake I made.Here is a bit of transparency from my world back then: I stopped knowing what was going on in my business. I had put my head in the sand. I was still working hard, but I had this dream that was taking most of my attention. I was so excited about my dream that I didn’t pay enough attention to my business numbers. My business credit debt was $58,126.66. I was paying $1,431.82 a month in interest on that debt. I went through all of my savings.On the upside, I quickly learned that I could buy a box of mac and cheese for one dollar and split it into two meals. I had to sell the motorcycle I loved so much to pay my mortgage one month..I started to doubt myself again. So, if you’ve doubted yourself, welcome to the club! We all have, and you’re not alone.All of this doesn’t mean you should stop. You need to take care of responsibilities and continue pursuing your dream.The strategy you are about to get could have helped me through this. My doubt got me to lose myself in Forensic Files and Law & Order binge-watching. I love those shows. But, feeling depressed as I tried to keep my business from collapsing, I would sit on the couch watching them, feeling sorry for myself. I spiraled down. I prayed but found I had more doubt than faith.I don’t say all of this to get you to feel bad for me. It was my fault. I let it happen. I am responsible.I’m telling you because I don’t want you to do the same thing. If I had put some eff ort in, even a little, I could have been making progress and been building my belief. Take care of your responsibilities while you keep building your belief. One more episode of a drama-filled crime show did not help me. Don’t be fooled. It can be a drama-filled distraction that just leads to another episode. Don’t do this. Focus on your mission.