Be a Sponge: The Unintended Lefty 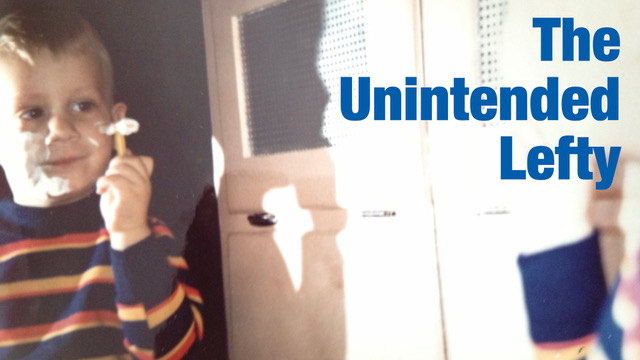 Most moms and dads want what is best for their kids. They have great intentions and are committed to doing whatever they believe is in their best interest. Some parents push their kids to go to college, be a doctor or a lawyer. Some even push their kids to follow their career path or take over the family business they worked for their whole lives. They intended for kids to have it “better” than they did. It is an admiral intention, but what if the children’s hearts, talents, and skills actually lay in a very different area?

Growing up in the 1960s, I hear there was a popular belief that life was harder as a lefty. If you are from that era, you may remember that lefties had fewer options back then. It was more challenging to find items designed for lefties, for example, baseball gloves. Right-handed people seemed to have an unfair advantage and many more options.

Some moms, like mine, did what they thought was best for their children. They sincerely wanted their child to have every advantage possible. Why wouldn’t they? It is in their DNA.

I was born a lefty. I naturally started doing things with my left hand. Mom did what she thought best and trained me to be a righty, which is one way of saying that she would slap my left hand and get angry whenever I tried to use it. Eventually, like a dog trained to sit, I caught on and learned to use my right hand as my dominant hand.

There is a classic line in Jurassic Park Jeff Goldblum’s character, Malcolm, says, “Life finds a way.” Apparently, so did I. Only mine was unintended and came from being naïve. One thing my mom did not know was which way a hockey stick was supposed to be curved for a righty. She did not know the difference. It’s funny because neither did I. One day, I realized when one of my friends who played hockey pointed out, “You are right-handed, but play hockey lefty?” What? I had no idea. I learned later why. I was meant to be a lefty. I was trained to be a righty. Well-meaning people train dreams out of us because they think it is for our own good. Take a moment and think deeply about these questions. What were you trained to be? What were you meant to be?

What my mom did not realize was that in baseball, lefties actually had an advantage because they were one step closer to first base! They could also be more challenging to pitch to at that age. There were other advantages too. Since I was also a baseball pitcher, I wonder if growing up, I would have been more talented had I nurtured my natural tendency. Had I nurtured what I was born with. There is no way to really know. And it is too late to change that, but it is not too late to learn and apply the lesson to my life now.

Here is what I do know. How can we get upset with people who love us for doing what they think is best? We could, but it would only fuel anger, and we could seemingly carry that with us for the rest of our lives. We are not alone in this. Not even close. I’d be willing to bet it is more the rule rather than the exception.

These adversities can serve us. We can also learn that we can be trained against our nature, and, at some point, we may gravitate back to it. Personally, it is even worse for not-so-well-meaning adults.

If we can be trained to do something against our nature when we are young and don’t know any better, what could happen if we trained ourselves as adults and go back to what we were meant to do? It is never too late. What if doing it now and re-engaging in what you were meant to do, was exactly the plan? What if there were actually unseen advantages to doing it now?