Be a Sponge: The Ugly Yellow Tie 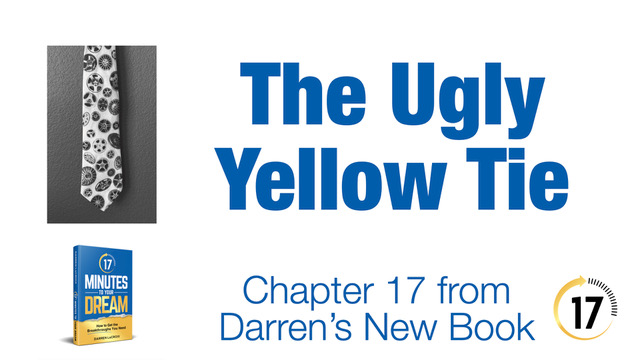 Ever have a lesson from a teacher that still serves you today? Back before I dreamed of being a comedian, I wanted to become an actor. I had always loved movies and TV and thought it would be the coolest job in the world. I took acting and auditioning classes in the early 1990s when I lived about an hour outside Boston.I was a sponge back then. And a teacher’s pet. I even helped my acting teacher, Bob North, move his furniture. He ended up getting me in a reenactment of an old TV show, Real Stories of the Highway Patrol. It was my first paid acting job and a blast. I was in a couple of low, low-budget B movies, and I was in heaven on the set.One of the things Bob said to me was, “There will be a day when you are tired of going to audition aft er audition because it feels like nothing ever pans out. That day that you are going to quit is the same day you would have landed the role.” I thought, “That was nice, but I’m never going to quit. I love this.” I hoped the other people, who were not as committed as me, were listening. At the time, I had the perfect job to pursue acting. As a telemarketer, I had a somewhat flexible schedule as long as I got my hours in each week.I lived in central Massachusetts and worked in Framingham, about forty minutes outside of Boston. When I got an audition in the city, I could clock out for an extended lunch, drive to the audition, then drive back to work and extend my day to get the hours in.One day, I got a call for a big audition for a commercial for Konica. I was excited and took an extended lunch break to make it happen. Sitting in the hallway crammed with actors outside of the casting agency, I was getting antsy. The audition times were way behind. I had flexible hours, but I had thought I’d be back soon. They were over an hour behind. I thought about how many fruitless auditions I had done. Actors were slowly coming out, and those in front of me were heading in. It felt like it was taking forever. It was coming up on ninety minutes. I started thinking I was wasting my time.Then, another actor popped in the hallway door and walked over to the check-in. He seemed to have a rapport with the agent. She took him next. I thought, “What? Are you kidding me?” I went up and asked how he got in ahead of us. The agent calmly explained that this actor was on break from work and needed to get back. I said, “I am on break too and drove from Framingham as well!” I went back to my seat, and that was it. I was done. It wasn’t fair. At that moment, Bob’s advice popped into my head, reminding me the day I wanted to quit was the same day I’d land the role.

I thought, “What if Bob is right? I’m here. I’m already going to be late getting back to work. I may lose some brownie points from my boss for taking much longer than expected, but I will stick this last one out. Ugh.”When it finally became my audition, I was standing in front of one of the directors for one of the biggest production companies. The role was an office guy making photocopies for a hubcap company. They were looking for facial reactions. Something clicked between the director and me. My expressions cracked him up. I could tell he was loving what I was doing. I had a blast.

Sure enough, I got the call. I landed the role. Bob was right. When we filmed the commercial, the wardrobe lady dressed me up and made a custom ugly yellow tie with hubcaps. My character had worked for a hubcap company. After we were done filming, I asked her if I could take the tie home with me. She reluctantly agreed. It hangs in my office now as my constant reminder that the days we will give up are the same days we would get the breakthroughs we need.Thank you, Bob North, wherever you are. Your spot-on lesson still serves me today. Now, more importantly, I hope it serves you. We have to pass on to others the lessons of our lives.I bet you have a similar story. If you do, hold it tight to your heart and remind yourself of your own ugly yellow tie story.