Be a Sponge: The Book Report: He was Like Me 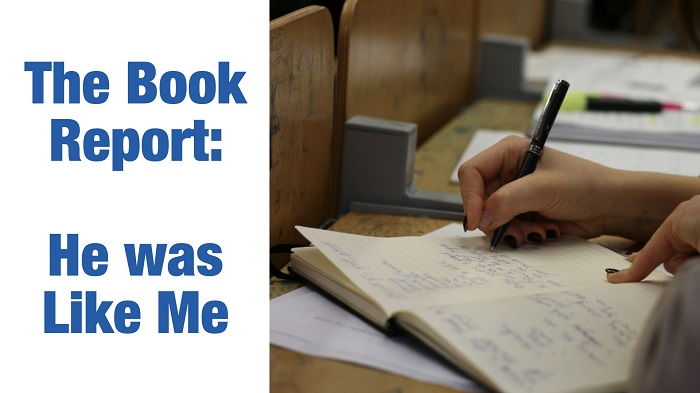 I was still in grade school when I was being made fun of because of my awkward, ugly black shoes, which were two different sizes. Now, I don’t know about you, but I love my mom, but she has zero sense of fashion. Let’s say what she thinks is cute does not really jive with most of the world. I know she meant well but did not realize how she dressed me would make me an even easier target for the mean kids at school. One of her favorite outfits to dress me in was a bright red corduroy Sherlock Holmes type of jacket with a matching red hat. I was being teased relentlessly with, “Darren, Darren, the Red Barron.” Yes, it rhymed, catchy! Catchy is not good when you are in grade school and always being teased.

My mom and dad loved me, and I was fortunate there. As a kid, though, we crave acceptance from our peers. We want desperately to belong. We want to be like everyone else. I did not know of any other kids born with a club foot. I felt special in a bad way, in the form of no hope. I could never amount to anything.

I was at the Auburn Public Library in the children’s section. I remember looking for a book to use for a book report. I was not particularly eager to read as being an undiagnosed dyslexic made reading a challenge and even painful at times. I picked up a book and noticed on the cover was a famous football player as a child. It showed him in leg braces, similar to me. What? He, the famous football player, had a challenge like me?

Now, as an adult, I know that the challenges were very different, and yet, in my young mind, they were exactly the same. It felt the same to me. Here was a man with a debilitating challenge like I had and yet, became an amazing athlete who became the best at what he did. I have to say it gave me hope. It was the power of the story. Never underestimate the power of a story. I’m glad my teacher forced us to do a book report. I’m so happy I found that book. Now, I know it was no mistake. I was supposed to find that book.

Looking back, that was the first motivational book that I discovered. I now see its profound effect on me and what an essential part of my story it was. It helped me to dream. It helped me to see the possibilities. It allowed me to let go of some limiting beliefs about my self-identity. Knowing his story somehow changed me. You may be curious as to who I’m talking about. It will be revealed later. Focus now on how this relates to you and your life’s journey.

What is your limiting self-belief? Can you identify it? If it is part of your thoughts, it is part of your current identity. If dyslexia was your challenge, seek out stories of successful people who had that early on in their life. Rudy Ruettiger, Whoopi Goldberg, and Steven Spielberg had dyslexia. They did pretty well.

Who had the challenges you did? Find out how others worked around it? Through it? Over it? Who had it worse than you and thrived anyway? For the Least Likely, finding stories of people we can relate to can bring us hope. Hope is the fuel to our fire. It helps us through, over, and around to get where we want to go and become who we wish to become.

Mark Brown says, “You have a story to tell, and someone needs to hear it.” This is why your story needs to be told. Someone like you needs to hear it. Had I not been forced to do that book report, I would not have remembered its impact almost five decades later. Please tell your story.