Be a Sponge: The Big Decision 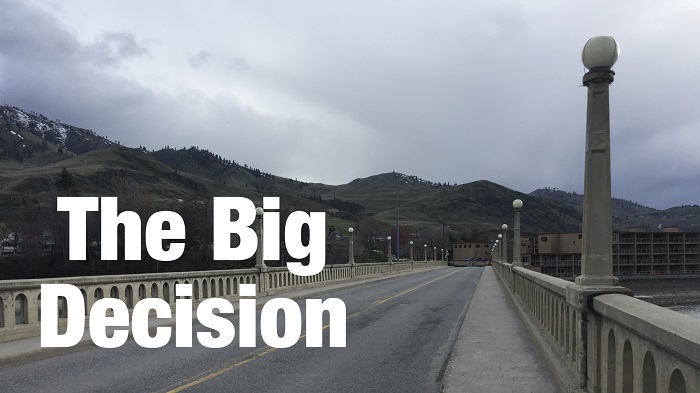 Have you ever looked back at some of your life-changing decisions? What prompted it? What was your thinking? Would you do it over again? Was it a good decision? Why was it good? Why was it not good? Once a decision is made, your outlook changes, and so does the world around you. You see it differently.

Our life and what we make of it are all based on our series of good and bad decisions. We can learn from them and start changing the trajectory of our life by making better decisions. One challenge is that some decisions may seem reasonable in the short run but not so good in the long run and vice versa. Is there some big decision you weigh now that scares you? Maybe relief and a big deep breath are on the other side.

This is about the most significant decision of my life, my commitment! First, a bit of essential backstory. Growing up, I usually played second string or, as we used to say, “I sat on the bench.” I was never great at anything. If it was not for my father being a coach in baseball, I might have never started in little league baseball. I did not have any patterns whatsoever of success. The only possible inkling was my persistence and not knowing I couldn’t. The lesson from my infancy that I could drag my little cast around and get anywhere I wanted to go, was not relearned until later in life. I also learned complaining and blaming in the interim. I had to unlearn that as well.

Like many kids growing up, I dreamed of playing professional sports. I was a dreamer, In fact, a daydream fantasizer. I would daydream constantly. I had visions of a dream life of becoming a star or a celebrity. Without all of the efforts, of course. That cracks me up just typing it. That is another reason the movie Rudy resonated with me. Rudy, in his high school days, was a dreamer and not a doer. That defined me as well.

I still remember playing by myself in my front yard right after I got my new baseball glove. I rehearsed over and over being introduced in front of a stadium of people as I picked up my new “Hutch” baseball glove. I pretended the announcers were calling my name as I ran onto the field and collected my new glove. This is really weird since the gloves players wore never got introduced. How does a kid’s mind work? Maybe it is better we don’t know. Better yet, perhaps as adults, we need to have that kind of creativity as the underdog.

I loved playing baseball as a kid. In fact, part of my big decision was based on just that. Baseball! I remember I would cry when games were rained out. It just wasn’t right. It’s supposed to rain other days, not the days of my baseball game! It just wasn’t fair. It affected me emotionally, and I pouted. Why even put up with the rest of the day? Why couldn’t we just fast-forward until another game day?

Another factor that weighed in on my big decision was the effort. My teammates and friends were often unwilling to put in the extra time or effort, but I was. How can you win if not everyone is working at the same level? Unless you have a coach that gets everyone to that same world-class level, it’s nearly impossible to win and truly reach your potential. I was not talented, but I was willing to work harder than most, just nowhere close to what it would take to be a professional athlete. It would pain me to be on a team that would not work as hard or cares as much as I did.

A third factor was longevity. When I heard about the career span of professional athletes, I was shocked. Are you kidding me? They dedicated their whole lives morning, noon, and night and the average NFL career is about four years. I heard someone say NFL stands for Not For Long. I would work my butt off, but I could not ignore the fact that if I made it and my career ended a few years into it, I’d be devastated. To me, it would feel like the ultimate rained-out game. I knew I could not handle that.

I stepped back and looked at my career at Bose. I went to college for marketing. I did enjoy it but didn’t love it. When I looked at my ultimate position at Bose, I thought I could climb the rungs of the corporate ladder and be the marketing manager for one of the products that Bose carried. The Acoustic Wave Music System? The Bose Noise Canceling Headset, which I sold and loved it. They were both very cool and known worldwide. I thought, “Hmmm. That’s it?” It gave me clarity. To work hard to attain that position may be very financially rewarding, but that position did not excite me. I took a deep breath and had clarity.

Making people laugh, even as a small paycheck, excited me! As I read the out-of-print book, Comic Lives and studied the great comedians, this shocking idea clicked. I studied and was inspired by Bob Hope, Jack Benny, Steve Martin, George Burns, Rosanne Barr, Robin Williams, and Steven Wright. Wait! George Burns performed until weeks before he passed at 100 years old. When he starred and appeared in the 1975 film The Sunshine Boys, it revived his career. Revived? So, if you are talented and find a way to remain relevant, comedy can be FL, For Long!

All of these factors converged for my big decision. I had no time frame I had to “make it” by. It could take 5 years or 20 years. (I was praying for 5, by the way.) There was no age limit to a career in comedy. It did not matter how long it took me to develop my talent and my act. It was one career path that, with persistence and God’s blessing, anything could happen. I also realized that it did not matter how hard the people around me worked out there under the spotlight. As the poster on my wall said, “If it’s to be, it’s up to me,” well, the post forgot God. I knew as the Least Likely I needed him big time.

You may have heard the idea of faith plus works. Part of having faith, I believe, is doing the work without any guaranty. You may have also heard the old tale of the man who prayed to God to win the lottery but never bought a ticket? That’s works. Or the guy who prayed for God to save him during the flood. God sent a helicopter and a boat, but many didn’t realize God works through people. Get in the boat he sent you! Maybe that is why you are reading this book!

What prompted my decision? Dreaming and realizing, it did not matter how long it took. I had many doubts along the way. Please do not think for a second that I did not. I questioned it along the way. I still wonder sometimes how I did keep going, but I did.

What were you thinking about in your life when you were reading this?

Would I do it over again? Yes!

Was it a good decision? For me, absolutely! I thank God every time I go on stage and have people sit and listen to me. The shy invisible kid with no voice and afraid to say anything. There is only one guarantee when it comes to dreams. Dreams without action rarely come to fruition.