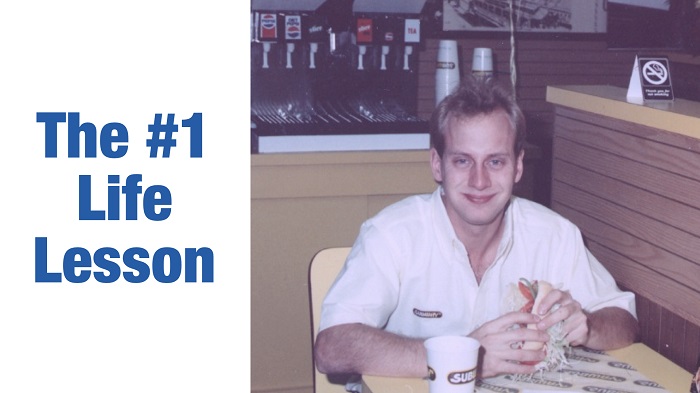 If you looked back at your life, what would you say your number one life lesson was?  That’s a deep one.  Does it still serve you today?  Do you see others who have not yet learned it and who will struggle?  For me it was a life lesson and a business lesson. The most important learning, for me, ever.

When I was young and ambitious, I was often quite stressed out as well.  I tried to force my way to success through persistence alone.  It still helps me, but now my approach is different and less stressful.

Right after college, as you may know, I went for the American dream.  I invested in my own business, a popular sandwich shop franchise.  It seemed to be the only way to acquire a loan, even with the help of a business partner.  Why?  Because I was right out of college and had no track record of success.  The bank counted on the franchise’s record of success.

I dreamed of being a multi-unit franchise owner.  I did everything right.  I did my homework. The franchise was successful, but there was still no location in my area. I researched locations.  I spoke to other owners.  I hired a lawyer to review the franchise agreement.  Paying someone $100 per hour when I had little money seemed like a stretch, but I knew it was the smart thing to do.  I did more homework than I ever did in school.

Fast forward a year and a half later: The franchise opened another location four miles down the road from me.  On the same road!  Yikes!  It was not fair. Why would they do that to me?  I’m a nice guy!  My small profits faded to nil.  I had to cut way back on my staff and even had to get a “day job” in order to pay my employees and not default on my business loan.  Ouch!

I ended up working 90-100 hours per week at the store or seven days a week at my day job, just to stay afloat. I was mad.  It just wasn’t fair.  The franchise should not have allowed it.  “It’s just not right,” I said over and over again. What would you do?  How would you feel?  I’ll bet you can relate to the feeling.

Thinking back to this, I’m reminded of something I heard from Jim Rohn.   In one of his presentations, Jim talks about his mentor’s asking him to write out a list of all the reasons why he was not successful.  Jim went home and made a list of every reason he was not successful. The next day he brought it back to his mentor. When Jim’s mentor reviewed it, he told him, “Jim, one problem with your list: Your name ain’t on it.”

Wow.  Double Ouch! Here I was mad at everyone else, but I was the one who had created all of my circumstances.  The lawyer whom I stretched myself to pay had told me that the franchise could do that.  I paid him $100 an hour and chose not to listen!  Though I had no business experience, I thought I knew better. Ego. Yikes. I chose the franchise.  I chose the location.  I made all the decisions.  I created my circumstances.  I am responsible.   Blaming others is the easy way out.  Sometimes circumstances are out of our control, but other times we put ourselves in those circumstances. [bctt tweet=”If we waste time blaming others, we are robbing ourselves of the very energy we need to get ourselves out of a challenge.” username=”DarrenLaCroix”]  Are you confident enough to look for the role you played in creating your circumstance? You can be blaming or filling in the hole you dug. It’s like texting and driving: you are doing one or the other or going back and forth between the two.  Either way it wastes precious energy and also brings more energy to the problem.  Put ALL that energy on the solution.  No one really wants to hear about your problems, unless they are waiting their turn to tell you how they have it worse.  They’ll say, “that’s nothing . . . ,etc.”

I ended up selling my franchise at a loss and was happy to do so.  I was told I could walk away and declare bankruptcy, but that would have followed me for years and maybe always kept a place of doubt in the back of my mind.   It turned out to be a blessing.  If I had not been at the lowest point of my life, I would never have tried standup which then led me to the life I love.  If my dream had worked out, I might be owning several sandwich shops and maybe doing well by now, but would never have found my passion.  Thank God for unanswered prayers.

“Everyone is self-made.
Only successful people are willing to admit it.”

I love this quote by a mentor, Tom.  He says this one best.  I’m still far from perfect.  Self-responsibility is the number one life lesson for me.  I’m still persistent, but now I have less stress because I do not give away my power or waste time blaming.  That can be exhausting and attract to you other victims to join you in whining. Now, when challenged, I ask myself, “What did I do to cause this?  What can I do to change the situation?  Who can help me?”

As you may have heard, I’m working on my next big dream, creating a movie. I have been working on the screen play for seven years. It should not take that long! Sylvester Stallone wrote Rocky in three days.  My problem was me. I dragged it out. It was only recently that I realized I if I finished it, then I have the bigger task to sell it to a movie company. That mean failure and rejection. Ouch. What kind of inspirational speaker am I living like that. How dare I. That realization lead me to “suck it up buttercup” and get the first draft written. In a matter of two weeks I wrote 49 pages. Most scripts are about 120 pages. I had such momentum that I started on the sequel and already have 20 pages of that done. My point is, my problem was not taking 100% responsibility.

How about you?  Have you learned this lesson?  Have a story you would share to inspire others reading this?  Any comments? Please post below!