Be a Sponge: Stan’s Unexpected Wisdom 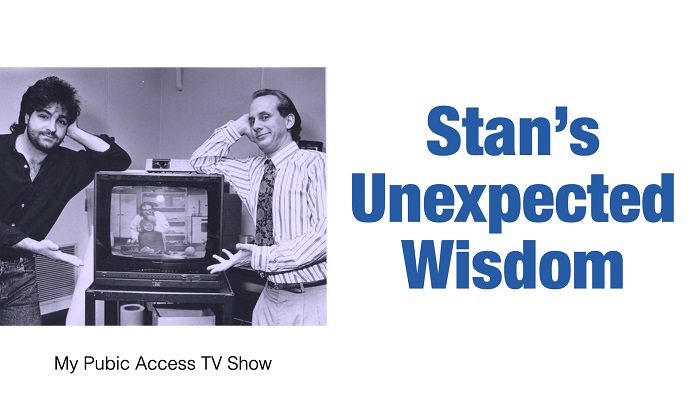 I can clearly see now that I was very much a dreamer, much more than a doer in my early days. I have to admit I have always been a bit enamored with very famous people who had significant accomplishments. I’m not saying it’s good. In fact, many times, it’s not good at all. It may have been my deep-seated feeling of being invisible to famous people that I quickly put them on a pedestal above myself. It would get me into trouble, but I lucked out with Stan.

Through one of my cable TV connections, I heard about these TV & Film Workshops in Maine. Apparently, some Hollywood players come to Portland, Maine, to teach what they do in real life in the summer. When I looked through the brochure of the classes offered, though I wanted to be an actor, the one that popped out at me was about Comedy TV Writing. It was to be taught by a man named Stanley Ralph Ross. He was a Hollywood Comedy writer. He wrote some award-winning sitcom episodes and was one of the writers for the 1960s TV Series Batman, The Monkees, and developed the original Wonder Woman for television. Wow! Really? Cool! I was excited to sit at the feet of a master.

Hey? Wait! Maybe I could be discovered if I took the class and met a real Hollywood writer. I could bring episodes of my cable TV show, Bob’s Remote, and he could see the potential! I’m in. I will make it happen. If I can learn some new techniques as well, that would be great too.

I remember the setting in Portland, Maine, was beautiful. It was a perfect backdrop for creativity and learning. It seemed like the organizers had a brilliant idea they brought to life.

I had no real idea what to expect Stanley Ralph Ross would be like. When he walked into class the first morning, the room changed. Stan was larger than life, confident, and spoke with a gravelly voice. He was filled with wisdom, gentle, and had a great sense of humor. OK, I was all in to learn.

I had brought the best, funniest episode of our skit comedy show, Bob’s Remote, with me. Stan had allowed me to show it to class. I was pumped! I’m going to be discovered. After all, some of my friends and brother thought it was stupid, but I loved creating and working with my funny friends. Our end result made some people laugh but creating it was an absolute blast.

Here is what I remember, Stan laughed. Instant validation. That alone shifted my belief system. Becoming famous would be a bonus. Stan was gentle and kind, but instead of saying, “You are talented, I’m going to get this in front of the right people, and we are going to make your show!” He actually said, “You need to learn to tell a story.” What? At the moment, I got the gist of what he was saying, but I had no idea that telling stories would become my life. He was saying skit comedy is cute and fun, but you must learn to tell stories. I’m glad I heard the wisdom he was giving me, but I’m not entirely sure I could absorb it to the depth in which it deserved. That lesson has lasted a lifetime.

The bigger lesson that I needed to learn from Stan came later in the class. I believe he could see my insecurity and the true help that I needed with that validation. He pulled me aside after class and had a heart-to-heart with me. I remember now crying. Then he said something profound about putting yourself and your work out there for people to see. He said, “People are going to tell you, you suck.”

Reading that right now, it may sound overly simple. I’ll tell you that it was life-changing for me. I am so a people pleaser, which is good and bad. One of my big flaws is taking things too personally, especially back then. We can’t let just one opinion take you out. We can’t let one person’s opinion or even a few take us off our path towards our dream. Stan was saying that naysayers are just part of the journey. My journey and your journey!

Thanks to Stan, now when I hear that or a variation of it, I think, “There’s another one Stan was referring to.” It’s part of putting yourself out there. I truly needed to hear that. Sometimes mentors can be in our life for years, and sometimes they come and go quickly. Though I stayed in touch on occasion, that one week with Stan was all I ever spent with him, face to face.

I was sad to hear he passed away on March 16, 2000. Our brief time together gave me hope and inspiration. He looked into me and saw what I needed, and gave it to me. What an amazing gift. Much more than making me famous.

Though I went to class with the wrong intention, I left the class with a much better one. Just the advice on stop creating skits and learn to tell stories was priceless. When I reported back to my, It’s Cheezy Production, friends I had passed on the advice. In 1994 we went from making our skit comedy show to creating Cold Chair episodes. It was still a comedy, but it was now a story instead of skits.

People will tell you, “You suck.” It’s part of chasing a crazy dream. If no one tells you that, maybe you aren’t reaching high enough.

Some mentors will be in your life for years, some for moments. Always be a sponge and cherish every moment and every bit of wisdom.