Be a Sponge: RIGHT NOW 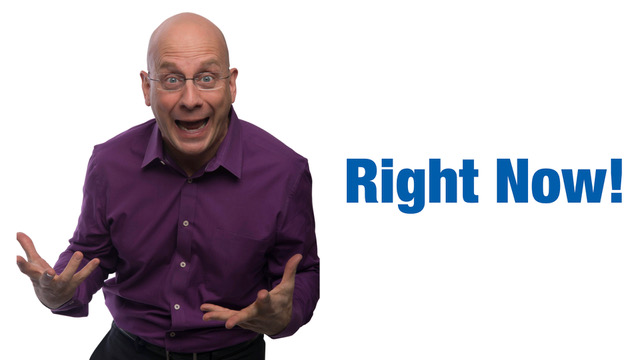 What will you do when the pressure is on? How will you cope with the anxiety and doubt? Thinking this through ahead of time and having a strategy can be the difference between success and failure. Sometimes it can be that simple.

When you approach that moment of tension, can you prepare yourself to handle it? What if you could? How would you do it? It is having the right mindset at the right time. It is handling those crucial moments when emotion wants to make you take flight rather than stay and fight. How can you prepare yourself for battle? When the moment happens, all that matters is what you do: right now.

I had no business going on a comedy stage early in my career. Without confidence, a well-written act, and not being naturally funny, I sincerely had no business being on that stage. To combat the voice of doubt in my head, I would sit in my little brown Volkswagen Rabbit outside the comedy club and pop in an audiocassette of my three power songs. (For our younger readers, cassettes and CDs are how we played songs in our cars back in the 1990s.) These three songs filled me with courage and grounded me on what truly was important.

Remember my friend S.A. that I mentioned in an earlier chapter? When I think of the lost void, I realize I needed to step up and fill it. As the quote said at the beginning of the chapter that I heard from a young pastor, “The world is also dark because good people hide.” I was tired of hiding. I was tired of playing small. You can’t change the world just by watching others. As the Least Likely, what I needed was courage. One tool that can be helpful is emotion. It has been said logic makes us think, but emotion makes us act. We need to find ways to get ourselves to act when we feel fear. We need a bigger emotion to overcome that. It can be regret. I needed to make the fear of missing out bigger than the fear of making a fool of myself. When we approach that critical moment, we need to think, “I need to act right now.”

If you know my story, you probably remember that I started attempting stand-up comedy in 1992. At around the same time, Mariah Carey and Boyz II Men released a song entitled “One Sweet Day.” It made me think about S.A. Some of the lyrics go like this:

“And I know you’re shining down on me from heaven

Like so many friends we’ve lost along the way,

And I know eventually we’ll be together

I was terrified to walk into comedy clubs with no talent, confidence, or a proven comedy routine. So how did I get myself to face that fear, lack of confidence, and self-doubt?

How did I drown it out? Answer: a mixed tape with significant meaning. (If you are younger than 40 and wondering what a mixed tape is, Google it. These days it would be called a playlist.) I nervously sat in my car outside the comedy clubs and listened to three songs, only two of which I can remember now. I remember the first two because of their meaning, purpose, and the feeling they gave me. The first was “Right Now” by one of my favorite groups, Van Halen. It was a reminder that all that mattered was that moment. What people thought and said about me did not matter. All that mattered was what I did right then.

As you have probably figured out, the second song was “One Sweet Day.” S.A. was taken too soon. He made people feel good about themselves, and now God needed him. Who would fill that void? He lost his life, but what did I really need to worry about? The worst thing I could do on the comedy stage was to bomb, and I could learn and grow from even my biggest bombs. Each one was a stepping stone to my career today. Use regret to motivate you.

“You can’t learn and grow from an experience you don’t have.”

Music is a powerful tool if you can use it to help with a breakthrough you are seeking. Who S.A. was on and off the field mattered. That’s why losing him was such a shock. He was an athlete in great shape and died unexpectedly. It reminded me that life could be cut super short.

A picture of S.A. still sits on my desk today. It had been in the background, but I pulled it forward and gave it prominence again. Who is your S.A.? What song helps you drown out the voice of doubt and makes you feel empowered? Let it be a catalyst essential to your next breakthrough.

It is music and stories that help move us when we have doubts.

Those songs moved me. What will move you? Create a playlist and play it before your critical, Right Now moment.

“If you hear the voice of doubt, drown it out.”

Prepare yourself for those moments. For this situation, I have altered one of the quotes I coined, “Skillset, without mindset will leave you upset.” Do whatever you can to prepare your mindset for those moments. Doubt is normal. Most of us have it. We just need to be strategic and drown it out before those critical moments. We need to overpower that little voice from our past that wants us to hide.

The songs that make us feel empowered change throughout our lives. After moving to Las Vegas, my friend Eden introduced me to worship songs unlike I was ever used to growing up. They start my day now each morning.

What are your songs right now? What songs can you listen to and feel instantly transformed? Make a playlist or two for each type of situation you encounter. Why? Go deep. Because when you need them, all that matters is what you do in that one moment. Ask yourself, “What do you need to do, be, or feel right now?”