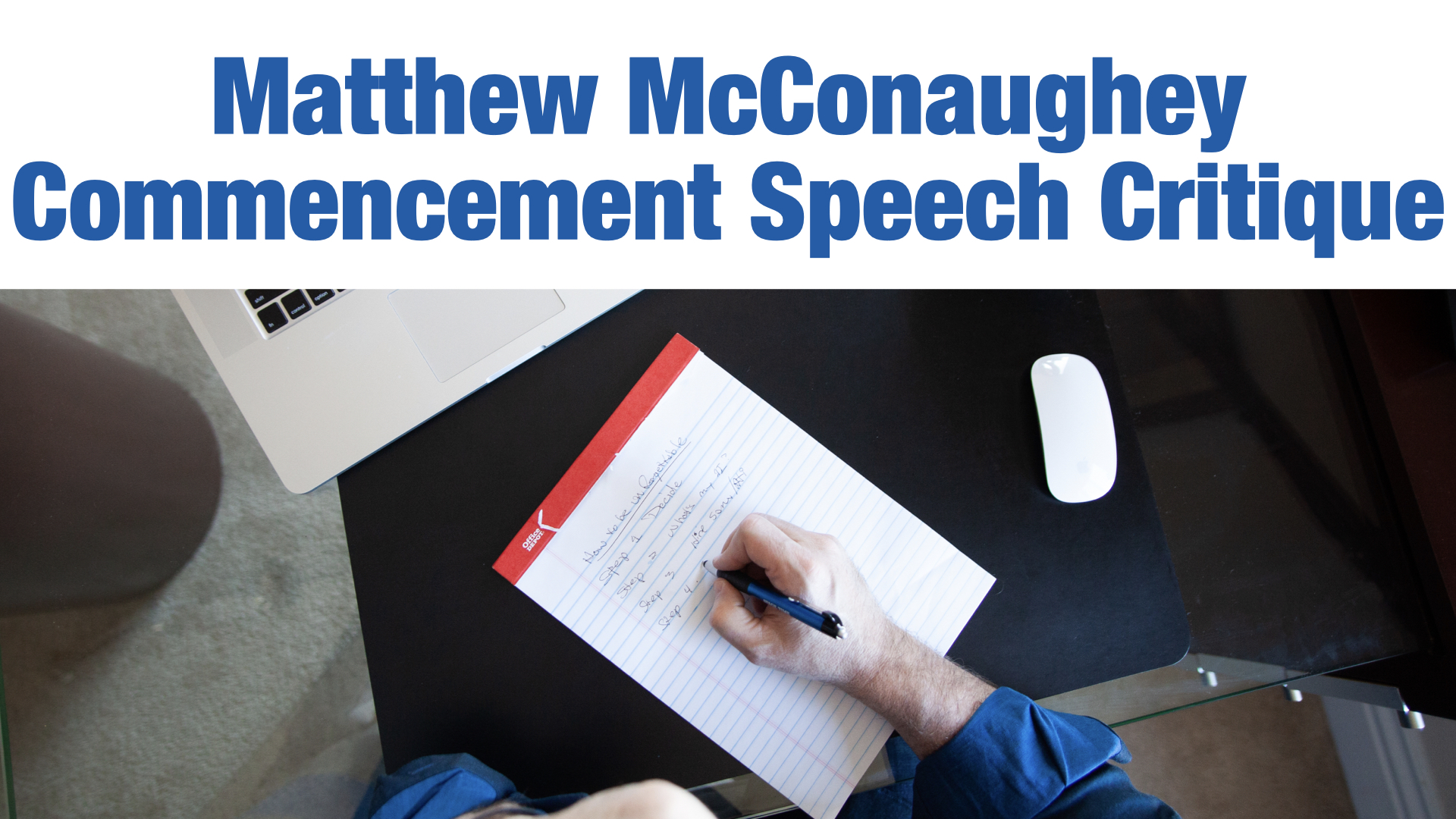 What would a speech coach say?

First, let me say that this is Matthew McConaughey. He’s a movie star and not a professional speaker. He’s a celebrity brought in to give an inspiring commencement speech. For those graduates, that alone makes the event even more unforgettable. I think it is very cool that he delivered it.

Also, it is very easy for me or anyone to critique as an after the fact. I have no idea if Matthew had a speech coach or not. I have no idea how much he prepared.  I’m just watching along with the other 1.2 million viewers just like you. And, I am a big fan of his. I felt it might be educational for you to see this speech critiqued.

I encourage you to open up a separate window and watch alongside me as I critique it. I will use the specific time code from this video.

I love his first point when he says life is not easy. The graduates need to hear it, especially from him. Their parents may have told them multiple times, but it will land more deeply coming from a celebrity.

In his defense, he will probably not deliver this again for a while, if ever again. So, he should not memorize it. He has internalized well enough for it to flow. For this situation, it’s perfect. If you are a professional who presents and delivers the same presentation many times, the rules are different. It is expected of us that we do not read our presentation.

I love how he wraps up this point succinctly, “Eliminate who you are not first, and you are going to find yourself where you need to be.”

I really liked his idea about letting other people tell you that you won. Let others acknowledge our success and keep striving. Cool.

It made me think about myself and what I’m doing, and how I’m acting. That is good. That is the intent of a good speech.

I would have suggested a bit clearer conclusion and wrapping up the entire speech. A recap possibly, but not essential. Matthew did not clearly communicate when he had completed the last point and was going into his close. He may have, but I may have missed it.

At 17:32, he said, “Get rid of the excess, the waste of time.” Though I thought all of his wisdom points were good, I believe it would have been life-changing for some if there were fewer points while being more deeply developed.

I appreciated Matthew’s commitment to bring wisdom, and it is apparent that he took this opportunity to influence seriously. It is obvious he prepared and thought deeply about it. It pains me when celebrities do not take something like this seriously. That was not the case here. I do not doubt that the graduates will remember the speech for years to come.

My biggest question is, what will they do differently as a result of hearing him? I know there were probably some great moments that people in the audience will remember, but it would be nearly impossible to remember all thirteen of his points. I know that he said in his opening, “Take what you want and leave the rest.” I’m not a fan of that approach. Remember, it is easy for me to sit back and be a critic. Matthew did not ask for my opinion or critique. After twenty years of coaching people, I chose to use this as a teaching tool to help you.

If you would like world-class feedback on your speech, check out Stage Time University and get coached on next week’s call. Go to: https://www.masteringpublicspeaking.com