Be a Sponge: “I Wanna Win the Speech Contest!” 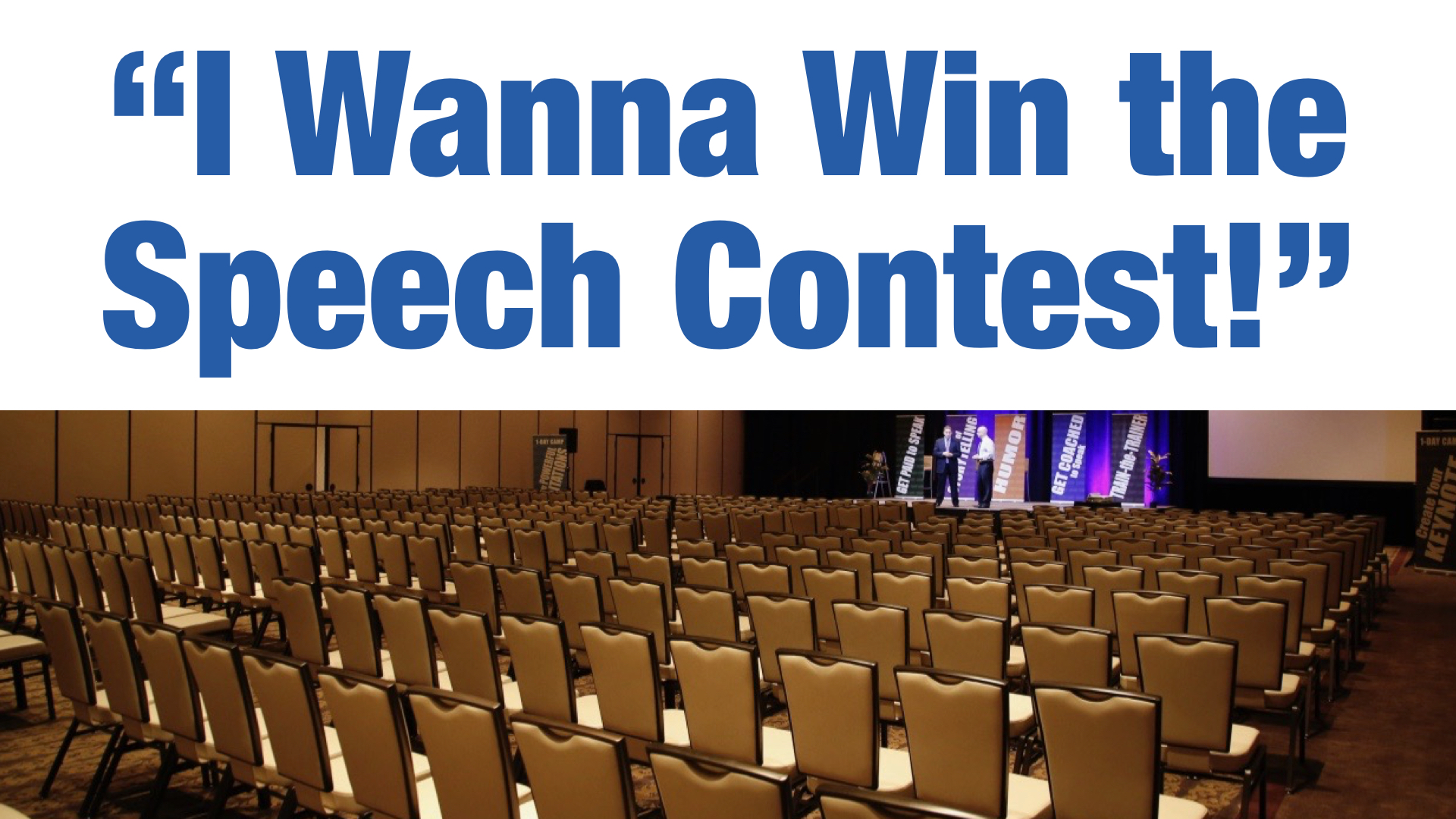 Question: If you met someone over coffee, and with sincerity and conviction, they say to you, “I wanna win the World Championship of Public Speaking.”

What would you say to them? How do you think you could best help them with their goal? If it was me, and I really wanted to help them, I’d ask them 5 questions.

“I want to be a World Champion.” Is easy to say, but challenging to actually bring to fruition. I’d want to understand if this was a wish or an actual goal. I’d be curious if this was a recent decision or something they decided a long time ago that they’ve been striving towards.

This week I gave an opening keynote at a conference in Las Vegas. Following me on stage was an incredible young man and Olympic Gold Medalist, Connor Fields. He was the gold medalist in BMX, in Rio 2016. I was inspired by his journey.

When he was 15 years old, after watching the Olympics and seeing the first BMX gold medal go to Latvia. He said something came over him and he realized he wanted to do that, he longed to win the gold. The next day he went to the garage of his parent’s house, and there he had his training weights and motivational posters of his favorite pros on the wall. He grabbed a sharpie and wrote on the wall, “I will one day become World Champion and win an Olympic Gold medal.”

So, it’s good to get clear and figure out if this statement was a wish or a serious goal. There is a big difference in what my advice would be, depending on what I determined. Most will say it was a goal, but asking the question, it may cause them to reflect more deeply.

#2 Are you willing to work harder than most?

My favorite Patricia Fripp, CSP, CPAE quote is, “Tell me what you say you want, show me one week of your life and you and I will both know if you will ever achieve it.”

There are currently an estimated 35,000 people who compete in the World Championship of Public Speaking each year. I’d clarify what they did yesterday to get one step closer to that goal. It pains me when I hear people who say that statement and follow it up by telling me they are going to start preparing in January. What? Olympians don’t wait until a few months before the competition to start training. They understand that there are many skill sets and muscles they need to work on, some that take years to make world-class. In fact, Connor told us that he trained six hours a day, every day. He also competed in other races all of the time. The other Championship races he entered, he viewed as training for the Olympics. Do you? Every audience is training for the next competition or next audience.

Sherrie Su, who came in second in the world last year, gave her semifinal speech three hundred times. Her final speech was practiced over two hundred times! She also joined our Stage Time University about ten months prior to get direction and coaching.

When I was competing, I sought out advice from every World Champion I could track down. 1990 World Champion, David Brooks told me, “Let no one out prepare you.” He didn’t say I had to have the best speech or be the best speaker, he said I had to be the most prepared. Brilliant. Remember, there is someone out there who is half as good as you right now, working twice as hard.

I also studied the previous nine years of World Championship contest videos. I watched them over and over to discover what was the difference between the person who came in first and the person who came in second. I watched the winners over and over again. I can tell you what I learned during that intense study, but you would not understand it to the depth that I did by spending the time actually studying myself.

Hard work is hard work. Most aren’t willing to do it.

To be a Champion, you must think and act like a Champion first. This part can be hard to grasp. How do you think differently? It starts with that question. Making it to the Olympics is an incredible accomplishment. Connor didn’t win the first time he made it to the Olympics. Champions realize that not winning can be essential to being a champion. There are more lessons to learn. Though a loss can deflate you, a champion does not stay down. Champions don’t blame others or judges. They take 100% responsibility.

Connor said that when you are training to be a champion, every decision you make 24/7 is geared towards what’s best for that one moment in time during the competition. He said that he had to sacrifice a lot along the way. He couldn’t hang out with his friends, do what he wanted to, or even eat what he wanted to. Every decision is pointed towards the outcome you desire.

This was a struggle for me too. I was constantly having to rethink everything I did in a new way. In Anaheim, CA, the night before the speech competition, I was walking in the hallway of the Marriott. I noticed a sign in front of the spa that advertised a massage for $89. My first thought was, “Wow, that’s a lot of money!” I was cheap back then. My second thought was, “What would a Champion do?” Well, the next morning was the biggest speech of my life. Dealing with stress is crucial in a high stakes competition. When I looked at it that way, it was a no brainer. When I walked into the spa, I saw Jim Key waiting for his massage. He came in second the next day. He then went on to win the World Championship himself. Champions think differently. It was a huge adjustment for me. Thoughts proceed results.

Asking this question will plant a deep seed that hopefully will germinate.

In 1994, Mark Brown made it to the finals of the World Championship, but did not place. David Brooks, who won the competition in 1990, offered to coach Mark for the following year if he wanted help. Little did Mark know, David offered the same thing to all eight competitors. Mark called him the next day. Mark won the World Championship the next year with the help from David’s guidance. None of the other finalists from the previous year made it to the finals again the following year. Coincidentally none of the other eight finalists from 1994 took David up on his offer either. Of course there are no guarantees, but a qualified coach sure can give you an advantage over figuring it out on your own, or worse, getting advice from unqualified people.

I have to admit, my ego in 2001 was much bigger than my skill set. I thought when Mark offered to coach me, that with my years of experience and a few tweaks from him on my speech, I might just have a shot. Well, I quickly had an awakening, that I was good compared to my club members, but I was far from World Class. Mark’s help was also crucial dealing with the overwhelming amounts of feedback I got. Wading through that mountain of feedback and knowing which adjustments to make was critical to my audience impact.

Here is one of the coolest things I noticed about Connor. It was easy to see that Connor lived an incredible story. Living the story and telling it in a powerful way to an audience are very different. Because Connor “gets it”, it brought a smile to my face when I discovered Connor had a speaking coach. I have no doubt his speaking career will follow the path of his BMX competition.

Why do you want to win? I’d want to discover if their quest was for a trophy? Or maybe to seek validation? Maybe they think it will launch a public speaking career. Well, to be honest, many previous winners do not have speaking as their main source of income. Some earn very little as a speaker. Some by choice. There are also many speakers who made the finals and out-earned most of the winners.

No one ever hired me for a fee because I won a 35 pound piece of Lucite. Yes, it did lead to many free speech requests, but that does not pay my mortgage. Outside of Toastmasters, very few people have a clue what the World Championship even is. It is more credible and easier to write a book, which anyone can do with discipline. Being an author has much more street cred than a trophy. Did you ever hear the story of Tony Robbins getting thrown off an NLP certification for trying to help people before he was certified? Yet, he has helped millions of people. Tony Robbins didn’t need validation, he just helped people. What about you?

See if you can figure out if the person you are having coffee withs goals are truly the trophy, or the growth of their skills and the audience’s outcome. My win was guaranteed because I was competing for the growth of my own stories for my professional keynote career. I did not even realize, when I entered the competition, it went beyond my District. Each level lead to my own growth, trophy or no trophy.

As Mark Brown coached me, he taught me to put the audience’s outcome first. When I occasionally showed signs of trophy lust, he brought me back on track with one powerful question. He asked, “On Saturday morning, you will have the privilege of 2,000 lives for seven minutes, what will you do with that?” That question still serves as my guide today. It takes me from giving a speech for the ego boost, to instead leaving a lasting impact on my audience. Mark taught me to put the message above the messenger.

By the way, Connor got grounded for writing on the wall of his parent’s garage. Years later, his dad, in tears, congratulated him when he was accomplishing what he wrote. We don’t need external validation. We just need to help people every time we get the privilege of the platform. The 77 days in the summer of 2001 changed my speaking and my mindset forever.

I hear, “I wanna win the speech contest.”

I wish I’d hear, “I have a message that I’d passionately love to share on any stage to any audience. I really wanna impact people’s lives.”

Does that make sense?