Be a Sponge: How To Be a Better Speaker and Move Your Audience Like Oscar Winners Sian Heder and Troy Kotsur 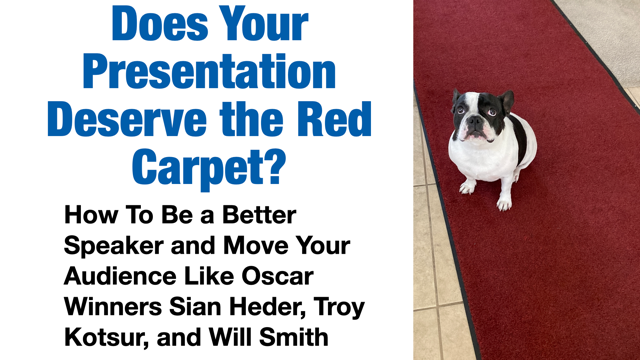 How memorable can you be in a 3-minute presentation? If you want to stand out from the competition and connect more deeply when presenting, tap into the principles behind these Oscar Award Speeches’ moving moments.

When you are in front of an audience, you have an opportunity to influence. Unfortunately, presenters in the business world bore their audience. What memorable moments would a speaking coach see in the acceptance speeches? What are the principles behind them that you can use in your presentations?

Though not a winner, Kevin Costner gave an amazing speech that deserves mention. He introduced and presented the Best Director award and told a personal story of his first time watching a movie when he was 7. He was mesmerized and said, “A director did that.” Through his magical storytelling, Mr. Costner took us to a time and place and made us clearly see the significance of what the work of directing is really all about. Is there a story that you can tell your audience, so they see the true significance of your topic?

Ariana DeBose, who won the Best Supporting Actress, delivered an exuberant, inspiring, yet concise speech. It was powerful. She said, “Imagine this little girl in a back seat of a white Ford Focus, a queer in a back seat who found her strength in art.” She created a picture for the audience. When you tell your stories, do you get your audience to picture the setting first?

Her speech had a powerful close. Do you? Most corporate presenters end with a lame “Thank you” slide. That’s horrible! Ms.DeBose closed by tying her passion for the LGBQ community into her work in West Side Story by confidently stating, “I promise you this: There is indeed a place for us.”

Best Supporting Actor, Troy Kotsur, nailed it! He is the 1st deaf actor to win an Oscar and had to hand his Oscar back to the presenter so he could communicate in sign language. It was moving. The raw emotion was powerful, and you could hear it in the interpreter’s voice. Troy was overcome with emotion when thanking his parents and then relieved the tension with a joke about teaching dirty words in sign language at the White House. Funny.

He also used the powerful tool of specificity. He didn’t just thank the director, Sian Heder. He gave a detailed reason why he thought she was amazing. There is a big difference between a polite thank you and a heartfelt, specific reason when motivating your troops.

He also sincerely acknowledged this was a moment bigger than just him. He dedicated the moment to the deaf community and explained, “This is our moment!” He then received a standing ovation.

Sian Heder, the writer and director of Coda knew her audience. She won the Award for The Best Adapted Screenplay. When she went up on stage wearing a brilliantly sparkling sequined dress, her first words were, “So glad I dressed like a disco ball.” It got a huge laugh. The comment acknowledged what the audience was thinking and was real and authentic. It worked.

When her name was called, you saw her grab someone not sitting with her, bringing her along to the stage. It was her interpreter. Though she is not hearing impaired and can speak, she knew her audience and her following. She knew they’d be watching and what they needed. I teach my students that the most important part of a presentation is the thought process in the listener’s mind. Know what your audience is thinking and wanting.

I teach people, “Don’t memorize, internalize.” Your audience wants you present, not perfect. Move your audience with magic moments. They will come best from your intent and connection with your audience.

Darren’s World Championship speech was unforgettable. He literally fell on his face and intentionally delivered part of his speech from lying on the stage. His fall is still being talked about in Toastmasters two decades later. He knew he had to stand out from his competition. He had two coaches. Host of Unforgettable Presentations Podcast. (Member of Toastmasters since 1994.)

Darren LaCroix, World Champion Speaker & Coach, has been coaching corporate presenters and executives around the world. He has delivered keynotes and coached in 44 International Cities and every state in the country. Including (Kiev, Ukraine -Luxsoft execs). Host of Unforgettable Presentations Podcast. (Member of Toastmasters since 1994.)