Be a Sponge: Dr. Bose; The Two MIT Students 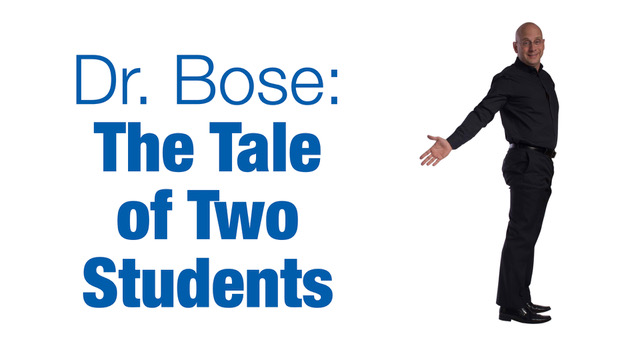 It was just another Direct Marketing Group, “Good News” team meeting at Bose. I did love that they put in a great deal of effort to make them fun and interesting, and it was a welcome relief from being on the phones all day. It also meant a special trip to the main building on top of Bose Mountain in Framingham. It was also special because I had heard that Dr. Amar Bose, the founder of Bose, would be speaking at the meeting. This was unusual and, I must admit, exciting. At the time, he was also still a professor at MIT.

Dr. Bose was a great storyteller. His stature and signature white hair, combined with his brilliance, presence, and charm, was captivating. When he spoke, I felt like an eager student listening to a favorite professor in one of his classes.

I loved hearing his famous story of how he had invented the idea for his famous noise-canceling headset while on a flight and could not enjoy music through the airline-supplied headset because the engine noise drowned it out. But that is another story.

Here is how I remember this story. Dr. Bose began telling us the story of two of his students. One summer, two students were placed in an internship at a large manufacturing company in the south. Both were smart and good students. The company they were to intern for had recently lost a large government contract. The project they were supposed to work on during their internship went away. However, that company still had an agreement with MIT that they still had to honor giving the students an internship.

Both of the students landed the same job. Both MIT engineering students’ jobs required them to stand at the end of a conveyor belt lined with microprocessors. As the microprocessors came to them all day long, they were to take each one off the belt and place it on a tester. The tester would then light up either red or green. If it was green, it was good and went in one basket. If the light turned red, it went into a different basket for the rejected ones. Not an exciting job for MIT engineering students hoping to gain more insights to prepare them for the engineering job market.

Dr. Bose understood the challenging situation, but as part of the MIT internship program, he needed to fly down and interview the students about what they were learning. Dr. Bose had separate meetings with each of the students. The first one came into the meeting room and was visibly enraged. He described the mundane job and ranted, “All day long! Dr. Bose, this is ridiculous! You’ve got to do something!” Dr. Bose listened to the heated rant.

The second student came into the room and explained the exact same situation. He said he was frustrated, but then a few days into the job, he had an idea. The student said they went to the supervisor and asked, “Could I take the bad microprocessors and a few tools and dissect them and study them?” The boss agreed. The student took the bad processors back to their apartment and studied them for hours. Then the student excitedly said, “Dr. Bose, I learned so much more than I have at a semester at MIT.” What? Wow! Dr. Bose was quite surprised.

Dr. Bose went on to say, “I don’t know whatever happened to those two students, but I’m pretty sure which way their careers went.” As Dr. Bose said this, he pointed each arm in different directions, one upward and one downwards.

What was the difference? Same students, same situation, and both brilliant. The difference was the mindset. We bring our mindset to every class we take, every book we read, and every situation we face. It’s not the class, the book, or the situation as much as our mindset towards each of them.

After I wrote this, I went to sit by the lake and connect with God. I’ve sat in the same spot before. For the first time, kids were hanging out on a bridge in front of me on a golf course that was closed at the time. I was trying to sit in peace. Their voices carried over the lake. I was a bit annoyed. I tried to focus on my breathing. It worked momentarily. Then, annoyed again. Augh. Then I thought about what I had just read! Wow. I need to take my own advice.  I needed to be like the second student. I then asked God a better question, “What am I to learn from this?” What I got back was patience. Got it! They had every right to be there, and they were having fun. They should. I let go. They soon left. Hmmmm.

I’m telling you the story with permission from Dr. Bose. It stuck with me. I hope it not only sticks with you, but you check in with yourself when you are learning something new. It can be easy to sit back and hear a story like this and see its obvious lesson. When you can or are in a situation, take inventory. What do you see and feel? What would the second student see, feel and do in your situation?

I hope it inspires you to think deeper and find the lessons that are beneath the surface. Which student have you been? Which student will you be?

What is the Sponge Principle?