Be a Sponge: Did you feel invisible growing up? 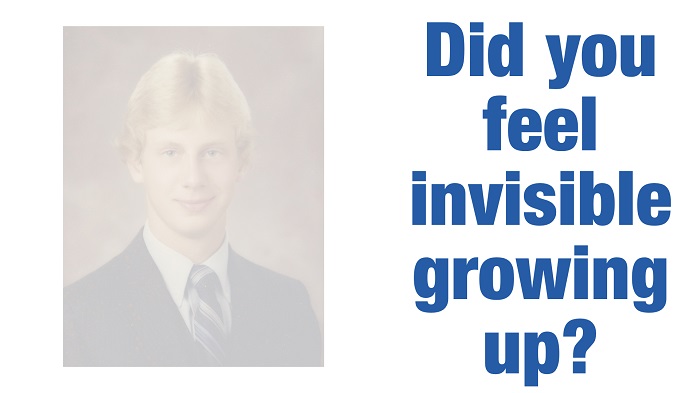 “Pardon me, my lord,” Gideon replied, “but how can I save Israel? My clan is the weakest in Manasseh, and I am the least in my family.”

When I was in high school, I have to say, I felt totally invisible. As I walked through the corridors of Auburn High School with the echo of random slamming lockers I felt alone, unnoticed and 100% dispensable.

I was youngest of three. My sister, Donna was the oldest and in the National Honor Society, she was super smart. She had become the first from either side of our families to graduate college. She got amazing grades. I could not live up to that.

In middle school I was forced to take remedial reading. You may have seen these machines where they stick your face in it like a horses blinders and it reveals only one word at a time. They increase and decrease the speed. I was never formally diagnosed with dyslexia, but I’d be willing to bet that’s me. I can look at a word while reading it and read a completely different word that I thought I saw.

The worst part of having to take Special Ed. Reading was how it made me feel. I felt like I went from invisible to invisible and dumb. The attention I was getting was for the wrong reasons. I can still remember taking Spanish class with Leopold Williams. He taught both French and Spanish. Even though I was half French, I remember choosing to take Spanish because I heard, “It was easier.” Not exactly the mindset you would expect from someone who ended up being a World Champion anything. It is what you would expect as thoughts from someone who was considered to be least likely.

Mr. Williams was the soccer coach and very successful. Kids loved and hated him. I did not do well in Spanish class. My learning challenges kicked in even more. Often, though being funny, Mr. Williams would say in front of class, “LaCroix, you bloody idiot.” Now it was funny, the class laughed, I laughed, and I secretly took it to heart. I know his intention was to be funny. More than thirty years later I still can hear him saying it. Now, I was not a child, but we will still take in what we hear.

My brother was a superstar athlete in football and track. In fact, I think he even still holds some records at Auburn High School. He was really good at whatever he did, other than grades. He was one of the cool kids, unless of course you asked my sister back then. They were only a couple years apart and always at odds. There was a big gap between my brother and me. I was a surprise a few years after my mom had a miscarriage.

I think seeing my brother and sister argue most of the time ingrained in me that I wanted to be a peacemaker. I hated conflict. I couldn’t make them stop. I was too small and too intimidated. I still do and now I know that it is a curse and benefit.

Me, I was the nice guy. I hated conflict. I think I was in one fight my whole youth. I loved sports, but was never a gifted athlete. Thank goodness I had a late birthday, the way our town’s little league worked, that meant I played with the kids who were a year behind me in school. One tiny advantage to help build a bit of self-esteem, yet in the back of my head it was even worse because of that exact fact I was playing baseball with kids a year younger than me. My dad coached my baseball teams in the first few years of organized baseball. Since dad was coach, I got to play first base and pitch. I loved pitching. I pitched side arm, Dan Quisenberry style.(He was the major leaguer who made it famous. I was not great at it, but on my team I was often the least of evils.)

As I moved up, dad stopped coaching and I stopped starting. I quickly became familiar with the term “riding the pine” and sitting the bench was usually where I watched the game from unless we were really ahead or losing poorly with no chance of winning.

My lack of playing made laundry a bit easier for mom. I took this truth and added it to my introduction to make me more relatable. One of my introductions says, “Darren’s mother was most proud because in high school, he was the only kid to be on every varsity team without ever getting his uniform dirty.” Yup, the truth can be funny.

The whole truth was my sister was smart, my brother was the jock, I was just the nice guy. I was just nice. Back then, I did not feel like it was an admirable quality. I felt like it was a curse. I lived the saying “Nice guys finish last.” It was an advantage to my friend though. When they were asked who else was going to wherever they were going out that night, if they included my name, they got permission to go, “Oh Darren’s going? Sure, have fun!”

There was never actually a designation at my high school about least likely to succeed. If you asked my classmates who would go on to become a comedian, I Darrentee you they would never have chosen me. I was quiet, shy, a bit socially awkward and didn’t have much self-esteem, which I believe is why when I discovered self-help, I was drawn to it like a magnet.

What is the lesson I learned?

Feeling invisible, I believe fueled my fire later on when my belief started building and When I got a taste of success, it made me realize all of that negative self talk in my head was just lies. I think this shaped why, later on that one laugh I got on stage in 1992 meant so much. Feeling invisible and feeling like a loser was how I spent most of my high school years. When I did have a girlfriend, it was always a Freshman. I think I needed that like Peter needed to deny Jesus three times before he could be the rock that He built his church on. Some of our biggest adversities become our biggest adversaries.