Be a Sponge: 2020 World Championship of Public Speaking – Critiques 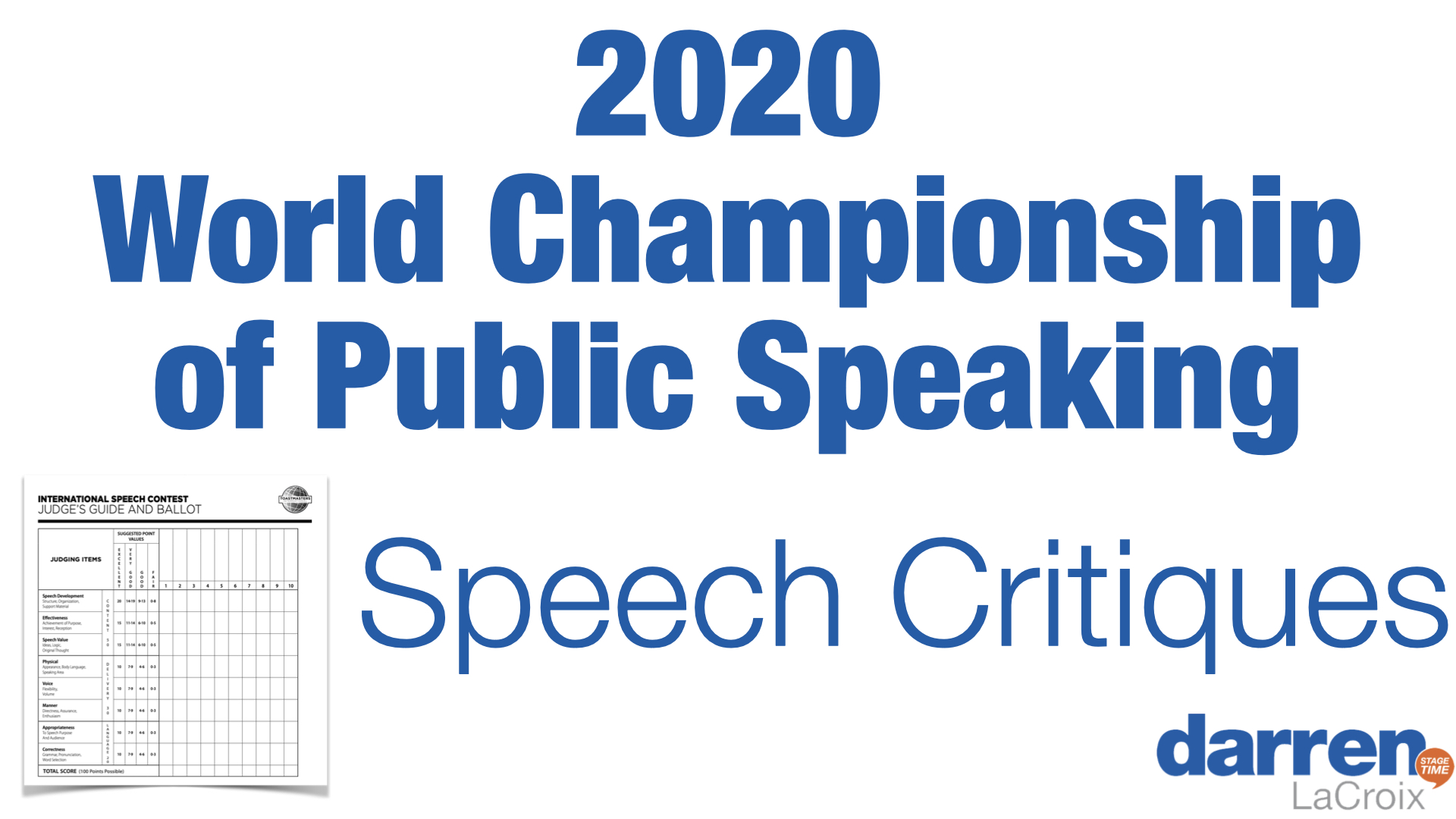 Ever wonder what a World-Class coach sees that you do not? You are about to find out. I got together with World Champion’s Mark Brown and Ed Tate, had a mini-watch party, and then did a speech contest debrief with our Stage Time Members. Sometimes even coaches disagree on some points, but often our perspectives are directly in line. Please keep in mind our view is not about good or bad; it’s about making it better. We focus on audience impact and “how we can connect the message more deeply.” These are only our suggestions. Each speaker is the CEO of their speech.

Did you watch the first-ever “virtual” 2020 World Championship of Public Speaking? This was new ground for everyone involved, especially for the contestants. Whether you watched or not, this article is written to help you understand what a speech coach looks for. It’s designed to help you have a deeper understanding of what, in a speech, truly impacts the thought process in the listener’s mind. Anyone can stand in front of an audience and deliver a presentation. What matters is what the audience takes away, period!

Please forward this article to friends AND comment on the blog. Feel free to agree or disagree with our comments. Share your perspective.

WARNING: This is an unusually long, detailed article. If this is your first article of mine, know that most of my articles are much shorter! It may take you a while to read, but consider it took me a day and a half to write it! No exaggeration.

If you did not see the contest yet, you can watch it now or reference my time codes here:

I will reference the time codes from this video when appropriate. Keep in mind the contest is judged based on the judge’s form. If you have not seen this, you can “google it” and find a version. Our focus is on audience takeaways and planting unforgettable seeds that germinate in the mind of the viewer.

I like Aaron’s transparency about his mental issue and being weird. That is good. Many presenters try too hard to look good.

Aaron used dialogue but would have been stronger if we saw the other character reacting to that dialogue. This is a common challenge in several speeches.

Ed Tate said that Aaron’s semi-final speech was stronger. That is one of the biggest challenges as a contestant. Which speech to do at the highest two levels. Mark Brown loved his phrase, “Show care.”  It may have been a stronger, more memorable condensing of his message if he said just those two words and repeated them alone a couple of times.

Saying, “It’s how you play roles” and “How you show care for others,” I feel needs some clarity. One must be dominant. Just pick one and say it a few times, so we have clarity. I don’t know if this is a message that resonates with Aaron’s heart. I wonder if there is a more profound message. It is a good message; don’t get me wrong. Just think the call to action could have been stronger.

It was a good speech. I, personally, was not emotionally moved. Keep in mind judging is subjective.

Lindsay is very expressive, but not over the top. Excellent! Lindsay did have some brief moments where it felt like she was acting a bit. Some moments were authentic. Mark Brown noticed she had a few moments where her expressions did not match the emotions of what she was saying. An example is smiling at a serious point.

She also used a circular story structure, which means she ended where she began. Well done.

I am an emotional guy. When presenters are fully connected to themselves, their content, and have a great story, I “feel” it. If you have ever viewed a speech contest, live or online, you can feel some of the strong ones. I felt Lindsay’s speech.

Please note that this speech had no humor. It didn’t need it. It would have been out of place. Please do not put too much importance on having humor in your speech.

This message matters. It is refreshing that Linda-Marie goes so deep. Coach Kevin Burke said in our debrief, “Finally, some said the heck with the contest I have something to say!” Linda-Marie took a huge risk with this speech. That alone is impressive. Ed Tate brought up an important point in our debrief. He quotes Mark Sanborn, “Our job as a speaker is not to be liked. If you want to be liked, get a dog.” Consider this when you create your speeches. Are you concerned about being liked?

IMPORTANT NOTE FOR FUTURE CONTESTANTS: Don’t use this card technique. People will immediately connect it to Linda-Marie. It’s hers now. In the contest, she owns it. It has now been done perfectly in the contest. Don’t be a copycat. After I did my fall, others used it in the following years. After World Champion Darren Tay wore his underwear over his pants, we saw others do their version. Please strive for being original.

I did not take many notes during his speech, and this is neither good nor bad. It just is. Different speakers resonate with different audience members. It left me thinking, “So what?” Mark Brown always says, “It’s your story, but it is for us.” Benjamin did attempt to bridge this gap, but it did not inspire me to do anything differently.

This speech was good, and he was very conversational. Ed, Mark, and I did not connect with this speech. Ed Tate has a great list of what he looks for Wisdom, aha’s, and insights.

When you compete in the World Championship, there is a great expectation. It was cute. The message was good but not powerful. I think it just needed to go deeper. On a side note, Benjamin had to follow a compelling speech. Whether we compete in a competition or keynote a large convention, there will always be great speeches, and at times we will need to follow them. Don’t let this fact intimidate you, instead let it inspire you to work harder and go deeper, so you become the one that is tough to follow. I say this not for selfishness but for your audience’s benefit.

This was a good speech. It was well-delivered. I think that it may have helped to come back to his character in the end.

This speech did not emotionally move me. It was a good reminder but didn’t seem to have a clear call to action. I encourage you to watch the video at the bottom of this article of us doing the debrief.

Maureen Zappala – It’s So Good to See You!

FULL DISCLOSURE: Myself and Stage Time University Coaches coached Maureen on this speech and her semi-final one. I will say that her speech and delivery transformed dramatically a week prior to the contest.

Kevin Burke, a former Vegas headliner, worked with Maureen on her delivery. It was amazing how her delivery evolved in a week. A week prior, when working with Maureen on an earlier version of this speech, I liked it, but it did not emotionally connect. After working with Kevin, I did feel it. Many people on our Stage Time Live Coaching Call witnessed the before and after. The change was dramatic. Well done.

DISCLAIMER: Mark Brown had coached him on the semi-final speech that got him to the finals.

Mike stated that his teacher’s word still applies to you. I love your focused questions, but do they not apply to you, Mike. In this case, I’d consider using the word “us.” One thing I thought was missing is how he applied this advice in his adult life or the difference it has made in his family. This could be as simple as a line or two.

Notice his sincere rapport with the camera, which makes us, as the viewer, feel like he’s speaking directly to us. Mike had a powerful presence. Congratulations on becoming the 2020 World Championship of Public Speaking. History is made.

DISCLAIMER: I am a big fan of Kwong over the years of competition.

I really liked this speech, but it still needed some tweaks. On a side note, though I’m not an official time, I think Kwong was disqualified for time. It kills me even more that the last line may have also put him over. I’m surprised that with his experience, he would even risk going that close with time.

His speech did grab me emotionally. I got choked up. I was pulling for the young Kwong to knock. When the audience is rooting for a character, you have them. The message is also universal.

Reminder: These critiques are on the delivery of one speech on one day. These comments should by no means be meant to define a person or a speaker, just a single delivery. Such critiques can be used to take offense or to inspire you to tap into the power of a good coach to truly impact lives. The intention is to inspire while educating. My coach’s eye has been developed over the years by surrounding myself with World-Class coaches and continuing to learn.

Once you achieve the privilege of the world stage, you also are opening yourself to feedback. I am not a judge; I’m a coach. Please keep in mind that it is easy to sit back and be a critic. Anyone can do that. The contestants put an enormous amount of time into their speeches.

If you are a competitor or have a message you truly want to share with the world, the time to start working on it is now, not in January. Not a month before the contest. There is someone out there with half the skills you have, working twice as hard. Their message and skills will grow, the harder they work.

Please also think beyond the contest. Maureen’s stories are a part of her keynote or other future speeches. That is why I joined the contest myself. If you have a message you care about, why limit it to a single stage? Especially if you did not win, you’re not done! Take it to TEDx? Companies? Associations?

If you’d like to hear and watch our critiques from our Stage Time University Summit, Click on video

What did you think? Agree? Disagree? See something we missed?

Want feedback on your speech from a World Champion coach?

Want to join Darren and his coaches for a 2-Day Master Workshop?