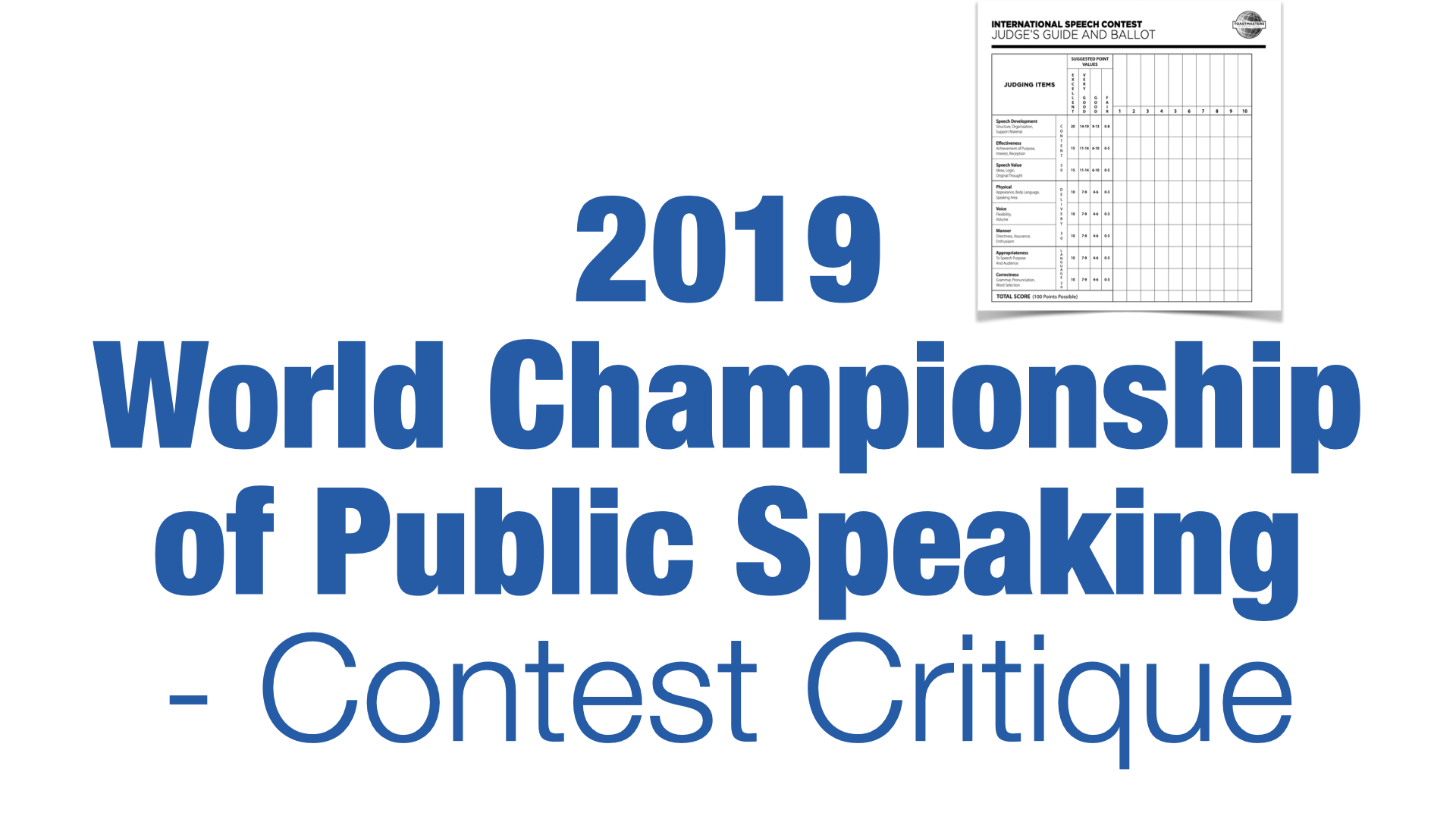 Were you at the 2019 World Championship of Public Speaking? Whether you were there or not this article is written to help you understand what a coach sees that most do not. It’s designed to help you have a deeper understanding of what in a speech truly impacts the thought process in the listener’s mind. Anyone can stand in front of an audience and deliver a presentation. What matters is what the audience takes away. Period.

This year I sat in the front row and took notes while sitting next to fellow World Champions Mark Brown, Ed Tate and Lance Miller. I then wrote this article about what we can all learn from all competitors to become better audience-focused presenters. I also host a Stage Time University Member Summit www.stagetimeuniversity.com the day after the contest. We invite my fellow World Champions to do a “debrief” of the contest. It is fun and fascinating. They see things that I don’t and vice versa. We record it so all of my members can learn from it. (There are a few videos on YouTube if you want to check it out. Just put in the search box: “World Champions Critique 2019 World Championship of Public Speaking”).

This article is filled with coaching insights from me and some from the other World Champions. This is in-depth and detailed so it may be a longer article than I usually write, but I feel there is a plethora of learning contained in every contest if you know where to look. My intention is to make it well worth your time.

First, the judges got it right. Boom! I look at the contest from a coaching perspective on delivering a message that matters, not a “points on the judge’s form” perspective. If people do amazingly well at this, they will do better and be more likely to take home a trophy. The trophy is a side-affect to serving the audience, not an end goal, if you do it right.

When you read this, keep a couple things in mind; I was not a judge. I’m a coach, and I surround myself with great coaches. My own World Championship speech was not perfect. There are a few things I’d change in it if I did it again. When you get to the World Stage and you are putting your message out there to the world, you’d better be able to handle feedback. Although there are over 1,000 people in the audience and this year’s winning speech already has over 190,000 views on YouTube, it is not like I’m giving away any secrets.

This is just my coach’s perspective from over two decades of study. Sometimes I disagree with other coaches, but usually there is a truth we always agree on. Some will have more comments than others. The number of comments does not mean good or bad, it only means there were teaching points. Keep in mind, 35,000 people competed this year and only six speakers made the finals. That is an amazing accomplishment that most competitors dream of, and thousands will never achieve. Congrats to each speaker! You did it!

Keep in mind, this feedback is one moment in time. Any other day the delivery may be different. It is the ability to deliver under the pressure of the contest. I fully admit it is easy for me, or anyone, to sit back and be a critic. I’m going to be honest and direct. My intention is to teach. Let me be super clear. I’m rooting for the audience to get the message they need delivered in a way they can absorb and apply it in their life.

Please leave any comments on my blog after you read this AND read other people’s comments. Feel free to disagree with me.

PLEASE Forward this article to any of your speaker friends.

Let’s go, remember, no fluff, just educational stuff. (These first three are the finalists in the order they spoke. Then I’ll review the top three winners.):

Daniel Midson-Short: In This Together

Watch our critique of Daniel: https://youtu.be/a4Df6UO9t60

Watch our critique of Beverly: https://youtu.be/N3LNuz9X2Ms

Watch our critique of Bharat: https://youtu.be/64V0Mj0AUAY

(FYI, Toastmasters International has posted videos of the top three winners’ speeches on YouTube, so I included the links if you wish to watch them, and I reference the time codes from these videos so you can see exactly what I’m referring to.)

Watch our critique of Kwong: https://youtu.be/3_hBVKqsM6U

Luisa is amazing on stage. Wow! What an amazing presence. You have to see it to believe it. What a spitfire! The audience simply adored her. In fact, more than one World Champion who watched her semifinal speech, remarked, if that had been the finals, she would have won.

Her authenticity was inspiring. Period.

Watch our critique of Luisa: https://youtu.be/3_hBVKqsM6U

Ed Tate said it best, “This speech is like a spy movie. It had a mission, danger, deceptions and villains.”

I like this title because it makes you curious why the story was unbelievable.

Aaron’s confidence and presence were omnipotent. His story was a journey and kept us completely engaged, and we wanted to go along with him. His writing was magnificent, and his message needed to be heard. To have the ability to say much in few words is a challenge, and he was a champion doing just that. He got to the heart of an issue and used an unbelievable story to deliver it. We did not see the message coming, and his twist was brilliant.

With so much turmoil in the current climate, his message reached deep to the heart of the matter. As an international organization, we are all from different cultures, and we face this every day. The universal message is needed in the current world view. Aaron does not take sides, yet brilliantly faces the issue head on with a personal story.

Watch our critique of Aaron: https://youtu.be/SwCvT9lZ1JM

I sincerely hope this detailed article has given you some major aha moments. My mentor Dave Fitzgerald told me, “Stop trying to find the story that will launch your career, but instead take the stories you already have and make them so good someone will pay to hear them.”

That was the reason why I entered the speech contest. I was stuck. My two coaches changed the way I prepared and delivered my speeches forever. More importantly, every audience I step in front of for the rest of my career will benefit because of the help I got that I did not know I needed. Are you coachable? Who do you go to for coaching? Are you serious about having a deep impact and leaving a memorable message? Please find someone who is qualified and you trust to help guide you. Your audience depends on it. Your story depends on it. Your legacy does too. If you want to be a professional and get high fees, its essential.

If you watch any of our critiques, you’ll see the power of a team of coaches. They agree on much, but also each sees things that some of the others do not. I had two coaches when I prepared my speech. They each added their own insights to my story and message. This is why when I created Stage Time University, the best thing I did was assemble a team of coaches highlighting their unique strengths.